The Louisville Leopards Wrestling Team has claimed the top overall seed for the Division II, Region 12 Dual Team Tournament. The Leopards earned a bye in the first round and will take on the winner of #8 Seed Marlington and #9 Seed Norton in the Regional Quarterfinals on Saturday, February 2 at Alliance High School.

Louisville won on the road at Marlington 55-12 earlier this season on December 13. The Leopards have not competed against Norton in a dual match in recent history. Although incomplete, our records indicate the last time LHS went up against the Panthers was on December 15, 1979 in a tri-match with the Archbishop Hoban Knights. Louisville defeated Norton 42-25 before falling to Hoban 35-12.

Other top seeds include the Lisbon Beaver Local Beavers, Canfield Cardinals, and Steubenville Big Red. The Leopards fell to the #2 Seed Lisbon Beaver Local in their most recent match on January 24 after the draw was already complete. The 35-27 defeat is Louisville’s only loss of the season.

The Leopards defeated #3 Seed Cardinals 35-34 on a tie-breaker back on January 16. The two programs have a lot of familiarity as they have met on he mat in each of the past three seasons. Canfield defeated Louisville 33-31 in the Regional Championship match last season to earn a trip to state. The only scenario where the two squads could meet in this year’s tournament is in that same Regional Final match Saturday Night.

Overall the Leopards are 3-1 in dual matches against Region 12 teams. Louisville also defeated #5 seed West Branch 49-22 back on December 22 in a battle of former NBC rivals. The Warriors and Leopards could potentially rematch in the Regional Semifinals if West Branch can upset #4 Steubenville in a potential Quarterfinal matchup. 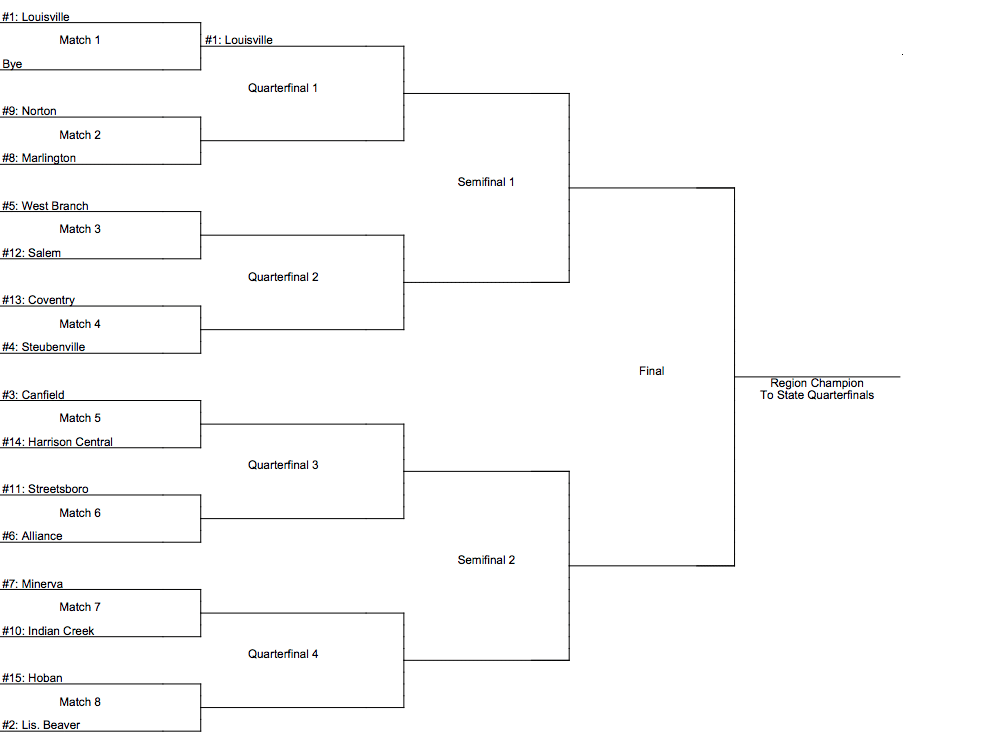 (Winner to State Quarterfinals on February 10)

@_rachel_smith32 The lineup program given out was far from accurate (see below), but the official box score can be viewed here on Leopard Nation: louisvilleleopards.org/beaver-local-b… pic.twitter.com/kybkp8fVuA 55 mins ago