Back on May 20, the Lady Leopards Softball team crushed the team record for home runs in convincing fashion during a 20-0 demolition of the Marlington Dukes.

Louisville set a team record by blasting 5 home runs in the game including 3 in the fourth inning (also a team record). The Leopards finished the season with 29 home runs eclipsing the old mark of 25 set back in 2011.

In the game at Marlington, Louisville led 10-0 before the game was postponed to May 20. All 5 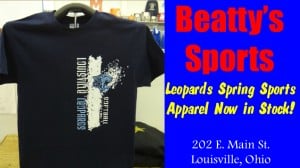 home runs were hit in the fourth and fifth innings when the game was made up. Kylie Zifer led off the make-up portion with a solo homer to right-center. Later on in the same inning, Annie Woolf belted a 3-run blast followed by Emily Cantley who cracked a solo shot.

In the fifth inning, the Lady Leopards continued to pour it on as Savannah Miner made her first varsity hit a 3-run bomb off the top of and over the fence in left-center field. Miner was the ninth different player to homer for Louisville in the season, which is also a team record and quite possibly a state record.

Katie Cozy followed next with a fence-clearing shot to the same spot in left-center. With that homer, the Lady Leopards hit back-to-back home runs twice in the same game for the first time in team history. Cozy finished with 6 homers on the year, 4 of which came on the road.

Although Grace Jackson did not hit a home run in this contest, she went yard a team-leading 8 times in 2014. Lexi Givens, Cantley, and Keri Hupp each hit 3 homers on the year, Woolf & Zifer cracked 2, and Amy Hoover smacked 1. With 29 home runs, Louisville finished second all-time in  the state for home runs hit by a Division I school in a single season (Medina Highlight had 31 in 2013).

Not to be overlooked by the power fest is the Leopards dominance of the NBC. With the victory over the Dukes, Louisville finished 14-0 in the conference for the third straight season. The Lady Leopards have won 52 consecutive NBC games, 69 out of 70 conference games overall, and have won the league outright 6 straight years. While they may not have made the Top Memory of 2013-14, this team over the past few years has arguably been the most dominant Leopards Sports Team in league play since Louisville joined the NBC.