Back on October 17, Louisville hosted GlenOak in the DI Sectional Finals. The Leopards had handed the Golden Eagles a 3-1 defeat earlier in the season, but on this night neither team gave an inch. For the first 80 minutes no one scored sending the contest into overtime.

Louisville took control of the game in the extra period, but the match was delayed shortly as 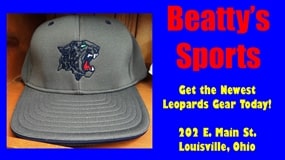 Baughman laid on the ground after a hard hit. Baughman got up and continued playing. On the winning score, Lizz Stefanik booted a corner kick just above the goal box. After a few deflections, Baughman boomed the ball into the net sending the Lady Leopards into celebration.

The victory was also the 100th win all-time for the Girls Soccer program at Louisville. The Lady Leopards would go on to finish the season an all-time best 15-2-1.