The never-say-die Leopards Boys Basketball won 12 games in 2013-14, but none were as sweet as their last second wins against Carrollton and Salem.

The first, and most memorable moment of the 2013-14 Basketball season, came at Carrollton 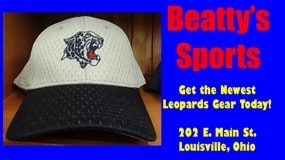 after a 5-day lay-off. The underdog Warriors literally played the favored Leopards to the buzzer back on January 3 and they held a 58-57 lead with just 5.4 seconds remaining in the contest.

Jake Pukys received the in-bound pass and quickly dribbled down to the other end. To the right of the hoop in front of the three-point line he flipped the ball to Bryce Mathie. Without a dribble, Mathie set his feet and buried home the game-winner as the buzzer sounded. The shot gave Louisville a relieving 59-58 victory and kept them alive in the NBC race at the time.

Not to be outdone, Pukys provided a game-winner of his own against the visiting Salem Quakers on January 21.

Salem tied the game at 49-49 with 45 seconds remaining. Louisville elected to hold the ball until the end and it proved to be the right decision. They found the right guy to give it too and Pukys delivered a three from the top of the key with just 2.1 seconds remaining.

The Quakers prayer went unanswered on the ensuing possession and the Leopards took the thriller 52-49. This victory once again kept Louisville alive in the conference race. They would end up finishing 9-5 in the league, which was good enough for third place. With a young cast in 2013-14, the future looks bright for Leopards Basketball!