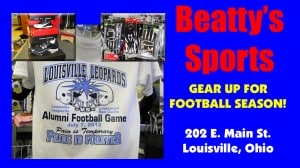 and almost three and half minutes faster than second place Marlington (79). The boys team was led by Nick Koczwara who finished third overall with a time of 17:29.36.  The Leopards had six runners place in the top ten along with Koczwara.  They included: Sean Gronow, Zach Cummings, Stephen Gronow, Stephen Stamp, and Nick Thomas.

The girls team finished with a combined time of 1:44:14.84, which was 28 places (33) and almost four minutes faster than second place Minerva (61).  Mackenzie Rankin finished second overall with a time of 19:34.55, which was just four seconds behind Minerva’s Kaele Lightfoot.  Also aiding Louisville’s victory were Amanda Oberster, Michelle Stamp, and Hannah Rumble who finished in the sixth through eighth consecutively.

After finishing second at Districts, Rankin blew by the field to capture an individual Regional Title on October 29.  Rankin finished 22.55 seconds ahead of Solon’s second place runner Therese Haiss with a time of 19:38.54.  Her effort helped propel the Lady Leopards to a second place finish at the Youngstown Regional, which earned them a trip to state.