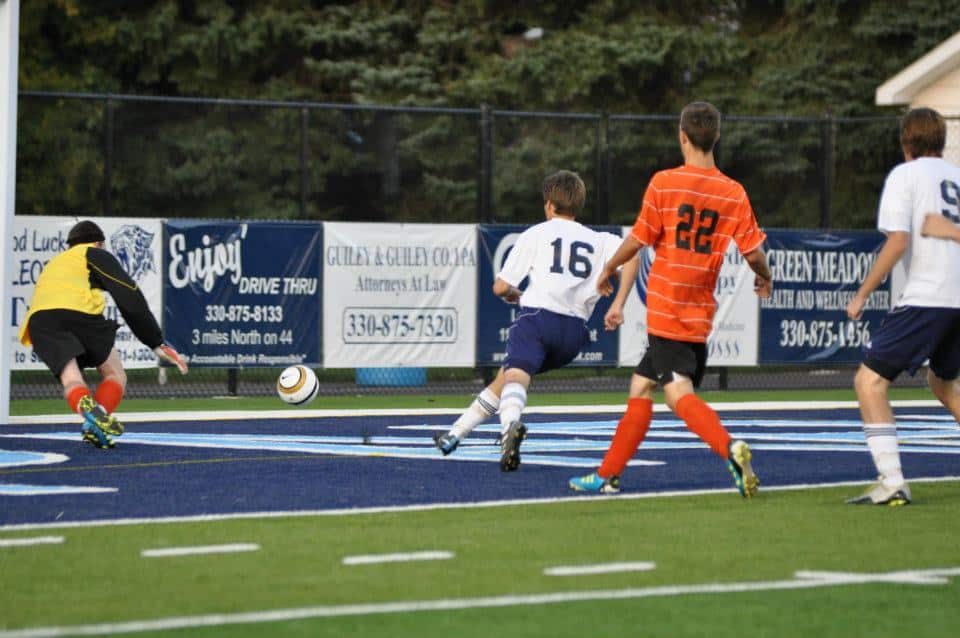 Since 2011-12 had so many great moments, I could not narrow it down to just 12.  Here are the moments that made honorable mention:

Nearly eight hours after the double-header against Indian Valley was originally supposed to start and 10 numb fingers & toes later, Sophomore right fielder Joey Duckworth delivered a 2-out shallow blooper to right field.  With little daylight left, the Braves player misplayed the ball that caromed of his glove and onto the grass.  Mike Kelly scored from third and Jon Crank roared home from second sending the Leopards bench into a frenzy.  The amount of jumping an excitement looked like fish jumping in and out of a fish bowl as the Leopards walked-off with a 12-11 victory.  Although this game had no league or tournament complications involved, the wait & length of the game that day made the ending all the sweeter.

After an excruciating loss to Minerva on the gridiron, the decided underdog Leopards basketball squad got even for LHS by going to Minerva and picking up a 59-50 victory on December 30.  Things looked grim when the Lions took a 40-35 lead late in the third quarter, but the Leopards defense clamped down.  Louisville held Minerva scoreless from the field for a span of 6:33 which jolted a 17-3 run.  Alex Schooley had a team-high 17 points during 2-6 Louisville’s first NBC victory of the season.

The Leopards completed the sweep of their oldest NBC rival with a 49-35 home win on February 3.  There was no comeback needed in that contest as Louisville stormed out to a 16-2 advantage early on in the second quarter.  Jake O’brien hit 3 three-pointers and scored 15 points to lead the Leopards. Although they were not crowned NBC Champions due to a questionable system of champion determination, the Louisville Leopards Varsity and JV squad took first place for their routines in the NBC Competition on January 14.  However, Minerva was declared NBC Champions for the 13th time in 15 years after winning the JV/Varsity combo routine.  Why that determines who wins the NBC, while the rest of the routines are thrown out is beyond me, but that’s another debate for another day.

The cheerleaders then participated in OASSA Regional Competition again at Marlington High School on February 4.  Their performance their earned them a trip to Columbus for the state competition.  Although they did not win it, it was quite a ride for our Lady Leopard cheerleaders.

There were not many bright spots during the 2011 Boys Soccer Campaign, but when the spotlight was turned on they burned the brightest.  Under the lights of the first ever soccer game at Louisville Leopards Stadium, the Louisville booters produced eight goals during an 8-0 throbbing of Massillon on September 22.  The win was just one of three victories all season for the Leps and only winning streak of the season after they defeated Canton South 7-5 the game before.

The victory over the Tigers was capped off by the players running through a student section tunnel at the conclusion of the contest and Head Coach John Henkel busting a move.  Harrison Raub led Louisville with a hat trick and Riley Groves also kicked home two goals. Senior Mike Kelly shot a 79 in the Sectional Tournament at Seven Hills Golf Course (Par 72) to advance to the District tournament. The Leopards team concluded by finishing 8th out of 13 teams in the tournament with 357 strokes.