Lady Leopards Bounce Back with Win Over Massillon 7-4 – Softball

The Louisville Leopards Varsity Softball Team never trailed in earning their first victory of the season over the visiting Massillon Tigers 7-4 Monday Evening at West Main Vet Clinic Field. With the victory, Louisville evens their record on the young season at 1-1.

Designated hitter Jenna Collins and first baseman Lauren Stillwagon both hit their first career varsity home runs to power the Lady Leopards offense. Collins hit a solo homer to the parking lot beyond the left field fence to put Louisville in front 2-0 in the first inning. She would finish 2-for-3 and come home for a third time via Stillwagon’s 2-run blast to left during the Leopards 4-run fifth inning. 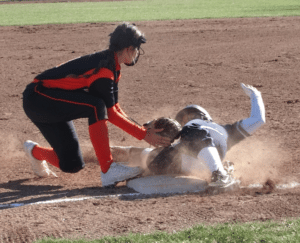 Matti Benson lays out on a steal of third.

Shortstop Matti Benson was a perfect 3-for-3 at the top of the lineup with a pair of doubles to lead the LHS offense. She set the tone from the start by leading off the Leopard first with a hard hit ground ball single to the left side of the infield. Benson then stole second and third on consecutive pitches to put herself into scoring position. Second baseman Shelby Mayle knocked her home three pitches later on a ground out to third to give LHS the early 1-0 advantage.

Massillon tied the game up in the top of the third. Senior centerfielder Kyra Woods doubled to begin the inning and senior second baseman Anna Berry singled with two outs. On the next pitch, Berry advanced to second via defensive indifference to put both runners into scoring position. Freshman shortstop Lea Newman brought them both home with a 2-run game-tying single to left field to knot the game at 2-2.

The Leopards reclaimed the lead with a little two-out magic of their own in the bottom of the fourth. Collins singled to begin the frame but was left stranded at first following the next two at-bats. Finally, left fielder Katie Porter delivered with a 2-out, RBI double on a fly ball to left that scored Collins from first base. That extra base knock put Louisville back in front 3-2.

The Lady Leopards expanded their lead to 7-2 after stringing together a 4-run fifth inning. Benson doubled and came home via a sacrifice fly by center fielder Kaylee Nolte. Collins then reached on error scoring Mayle, who singled earlier in the inning, from second. Stillwagon cleared the bases and the fences on the next pitch to give LHS a five run cushion.

The Lady Tigers inched closer when senior left fielder Jada Regula hit a 2-run home run with no one out in the top of the seventh. But Louisville starting pitcher Cloie Ensley retired the next three WHS batters to earn her first victory in the circle.

With the victory, Louisville has now won six straight over Massillon dating back to 2009 and also the last five straight in the series played at home since 2001. The Lady Leopards are now 20-9 against the Lady Tigers all-time, which includes a 10-2 record in games played at LHS.

UP NEXT: The Louisville Leopards Softball Team will next travel to face the East Canton Hornets on Tuesday, March 30 at 5:00 PM.