Runs came at a premium Wednesday Evening at Andy Aljancic Field, but the Leopards wasted no time in getting on the board first. After two quick outs, senior left fielder Connor Adelman beat out Salem third baseman Gavin Wilms throw to first to become Louisville’s first baserunner. Then junior designated hitter Karson Siegfried was hit by the next pitch to slide Adelman into scoring position.

Two pitches later, sophomore first baseman Cole Miller singled on hard ground ball to left field to bring home Adelman home from second to give the Leopards an early 1-0 cushion. On the very next pitch, senior third baseman Caleb Miller delivered an RBI single to right field that brought in Siegfried from third to up the LHS lead to 2-0.

Those two runs would prove to be all Louisville would need as senior starting pitcher Anthony Warner went the distance. He threw all seven innings, gave up one run on three hits, and struck out eight en rout to improving to 8-0 on the season.

Warner retired the first eleven Quaker batters to start the game. He surrendered a two-out single in the fourth inning and then was bailed out by the play of the game. Senior shortstop JT Popick made a diving grab on a screaming liner to end the frame.

An inning later, Warner found himself in a bases loaded jam with no one out. He would only allow a single run to keep the Leopards in front 2-1. After allowing that run, Warner retired nine of the final ten Salem hitters he faced to close the game.

Warner was backed up in the field as Louisville’s defense played its second straight errorless contest. At the start of the seventh, Cole Miller came off the bag at first to reel in an errant throw. He then tagged the Quaker runner in the process for the first out of the inning. Warner struck out the next hitter and the final batter popped out the Popick at shortstop to end the game.

Beck Goes 2-for-3 to Lead Salem

The Quakers batters struggled to hit Warner all evening long, except for catcher Darius Beck who went 2-for-3. Beck singled to break up Warner’s perfect game bid in the fourth inning and later hit a one-out double to left field in the bottom of the sixth. Beck was left stranded both times.

Salem’s only other hit came in the fifth inning. Pitcher Carson Rhodes walked to start the frame and designated hitter Corey Riesen followed with an infield single to move Rhodes to second. Three pitches later, left fielder Brock Young was hit by a pitch to load the bases. Second baseman Lance Bailey came to the plate next and hit a sacrifice fly to left field bringing home Rhodes from third to chop the Quaker deficit in half at 2-1.

Warner got the next batter to strikeout and the following batter to fly out to junior center fielder Charlie Roberts to end the frame.

The Leopards out-hit the Quakers 8-3 for the contest as each of Louisville’s first six batters recorded hits. Adelman finished 2-for-3 at the plate and Cole Miller also went 2-for-4. Caleb Miller, Popick, Roberts, and Siegfried all tallied base hits as well.

Rhodes also threw a complete game for Salem while striking out eight in a losing effort. After allowing two runs in the first inning, Rhodes shutout the Leopards the rest of the way despite facing multiple threats. Louisville won despite stranding eleven runners throughout the game.

This is the first time the Leopards have advanced to a district final since 2018. They defeated the Norton Panthers 4-3 in extra innings of their DII Akron District Semifinal four years ago before falling to the Tallmadge Blue Devils 1-0 in the District Championship game at Canal Park.

Louisville will seek its first district title since 2009 when they host the #2 seed Marlington Dukes Wednesday at 5:00 PM. Marlington defeated #12 seed Streetsboro 4-2 earlier at Andy Aljancic Field in their district semifinal matchup.

UP NEXT: The #5 seed Louisville Baseball Team will next host the #2 seed Marlington Dukes in the DII Louisville District Championship on Wednesday, May 25. Game time is set for 5:00 PM from Andy Aljancic Field.

Cover Photo By The Louisville Herald 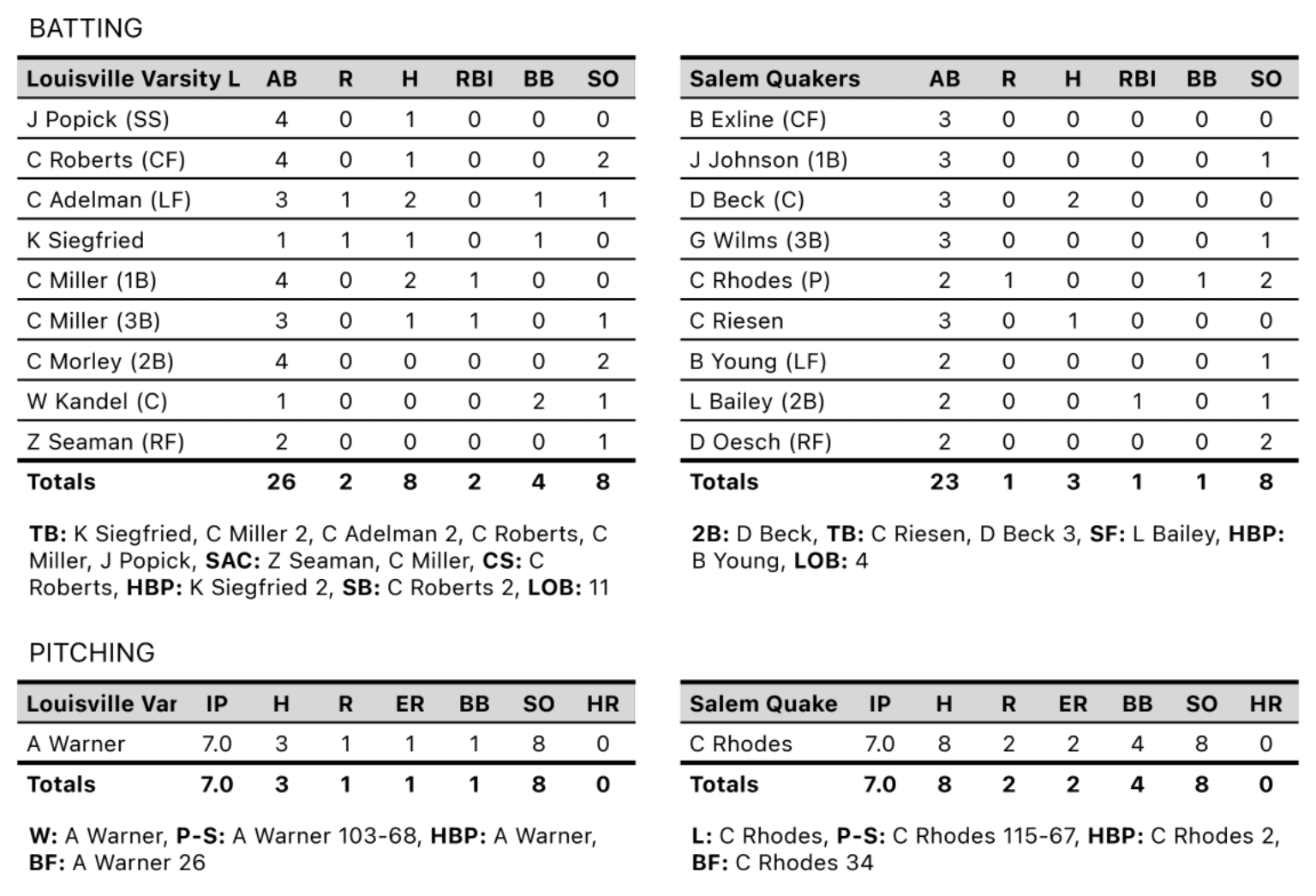