The Louisville Leopards Varsity Baseball Team exploded for a 16-4 run-rule victory over the host Berlin Hiland Hawks in six innings Friday Night at Hiland High School. With the victory, Louisville improves to 19-9 on the season and finishes the regular season with a mark of 18-9.

Senior left fielder Connor Adelman hit a two-run homer in the bottom of the first inning to give the Leopards an early 2-0 lead. Adelman would finish 2-for-3 and score three runs during the contest.

Hiland answered back with a pair of runs in the bottom half of the first to tie the game at 2-2. First baseman Jeff Todaro hit an RBI single scoring second baseman/pitcher Grant Miller. Then catcher/pitcher Dakota Miller cracked a two-out RBI single plating shortstop Nolan Yoder.

The Leopards erupted for six more runs in the second inning to take a commanding 8-2 advantage. Senior third baseman Caleb Miller doubled to start the frame, junior second baseman Connor Morley reached on a fielder’s choice, and senior catcher Walker Kandel followed with a walk to load the bases. On the next pitch, senior right fielder Zack Seaman cleared the fence in left for a grand slam to put Louisville back in front 6-2.

Later in the inning, senior shortstop JT Popick scored on a successful double steal along with junior center fielder Charlie Roberts who reached second on the same play. Roberts then stole third and scored on an error by the catcher to increase the Louisville lead to 8-2.

Siegfried Homers and Drives In 5 Runs

Junior designated hitter Karson Siegfried finished 2-for-4 and drove in five runs in the cleanup spot for the Leopards. Siegfried hit a two-run double in the top of the fourth that brought home Roberts and Adelman to expand the Louisville lead to 10-3. The double is his 13th of the season breaking the previous LHS single season record of 12 hit by Jason Archer in 2000.

Congratulations to @KarsonSiegfried for breaking the single season doubles record (13). To top it off he hit an a absolute bomb 💣 over the building for his first dinger of his high school career. This uncommitted Junior is only going get better and better! @PBROhioScout pic.twitter.com/Gy5LMYncYs

Later in the sixth, Siegfried drove in the same two runners again when he smashed a three-run bomb over the left field fence to make it 13-3.

Roberts Finishes a Perfect 4-for-4

Roberts would finish 4-for-4 for the game and scored four runs throughout. Louisville out-hit Berlin Hiland 13-8 on the night. Caleb Miller also had a multi-hit game going 2-for-3 at the dish with a pair of runs.

Miller Strikes Out 5 in Victory

Cole Miller pitched the first three innings, gave up three runs on four hits, and struck out five to earn the victory on the mound for the Leopards.

Todaro finished 2-for-2 with a pair of RBIs to lead Berlin Hiland. His sacrifice fly in the bottom of the third brought home Nolan Yoder who tripled on the at-bat before.

Catcher Braden Kaufman also tripled to lead-off the Hawks sixth inning. Then Center fielder Isaak Yoder replaced him at first following a fielder’s choice. Hiland’s final run of the game came on another sacrifice fly by third baseman/second baseman Kobe Lapp who drove in Isaak Yoder on the play to make the final count 16-4.

UP NEXT: The #5 Seed Louisville Leopards Baseball Team will next host the #3 Seed Salem Quakers in the DII Louisville District Semifinals on Monday, May 23 at 5:00 PM. 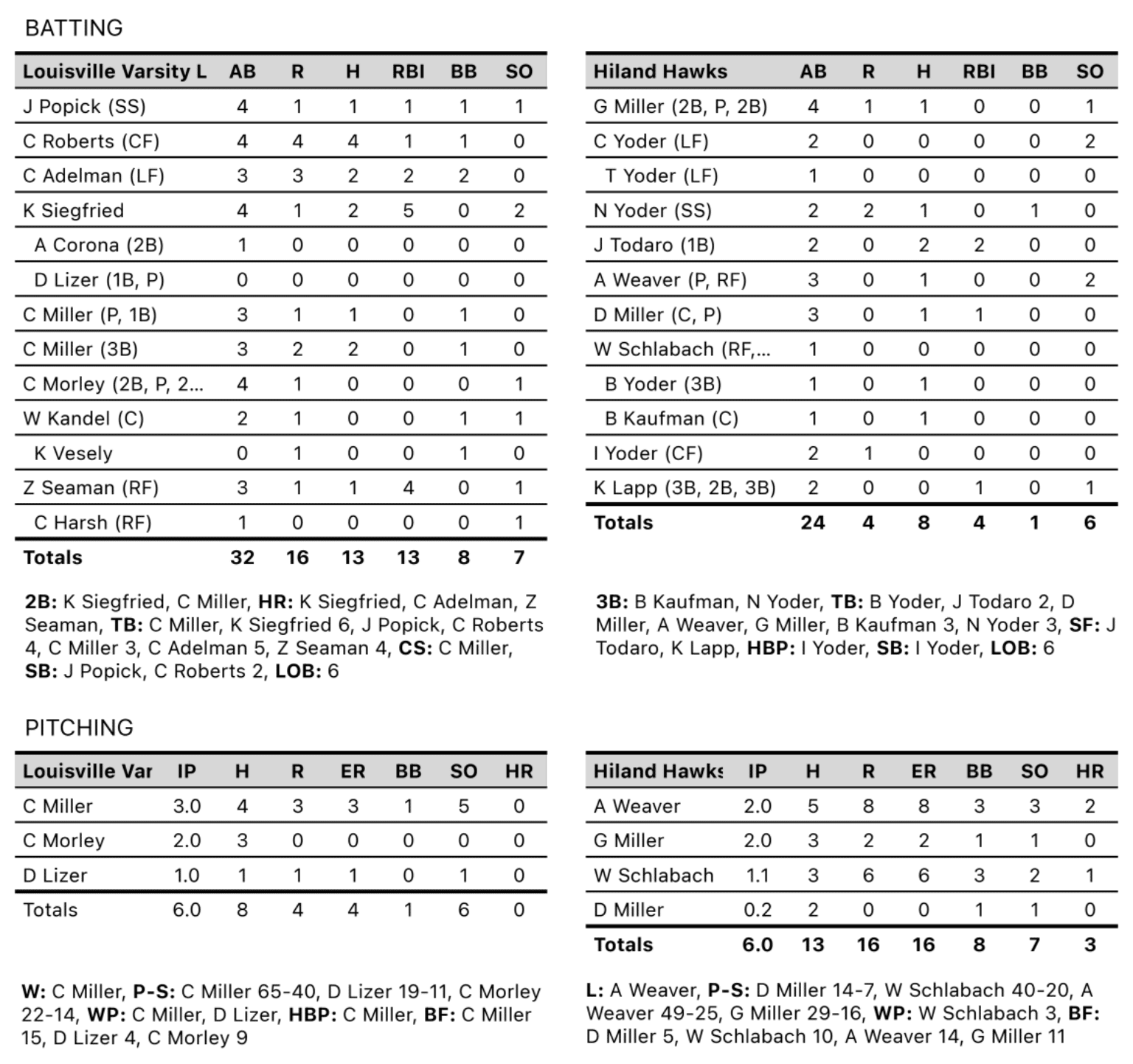 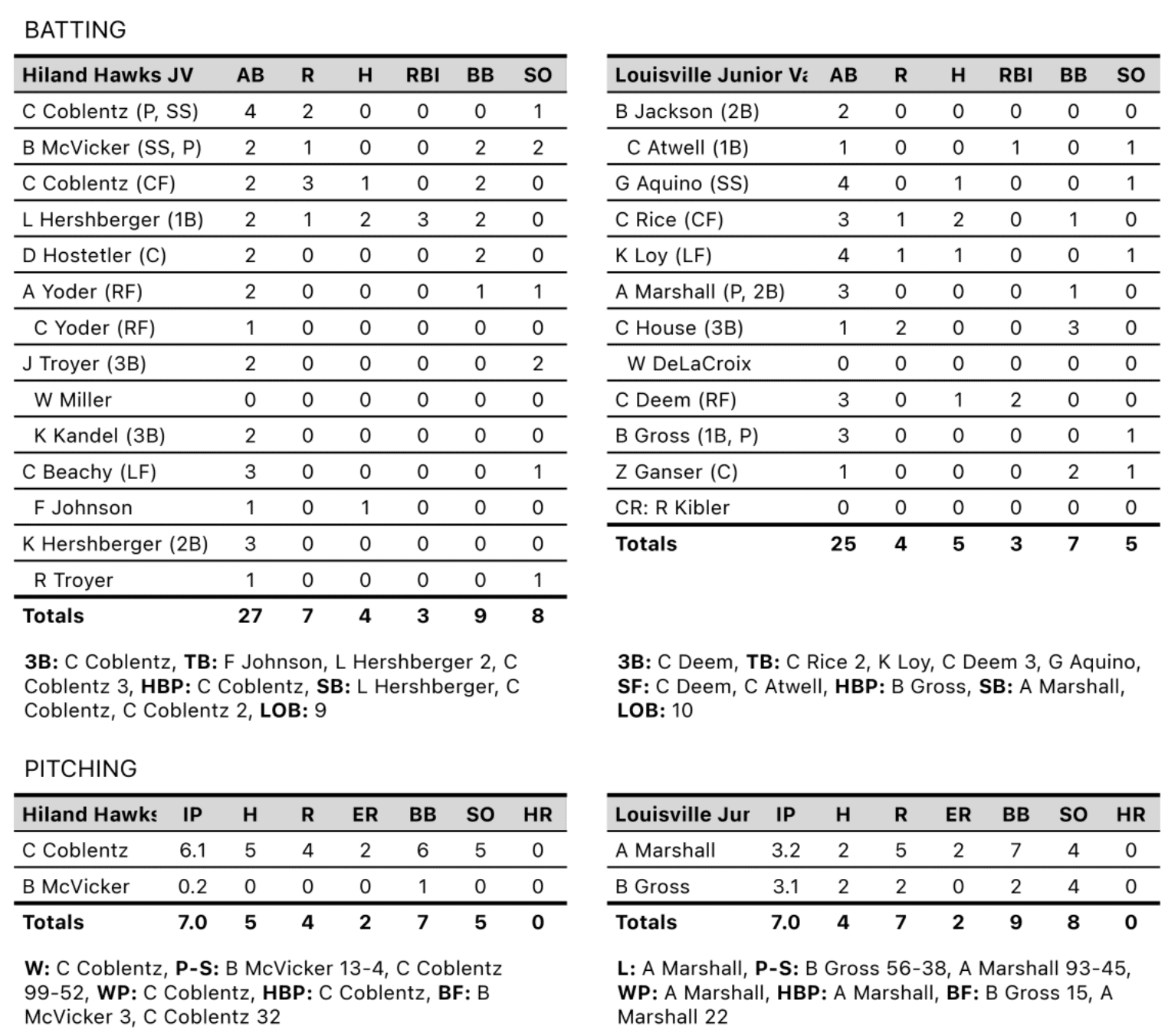