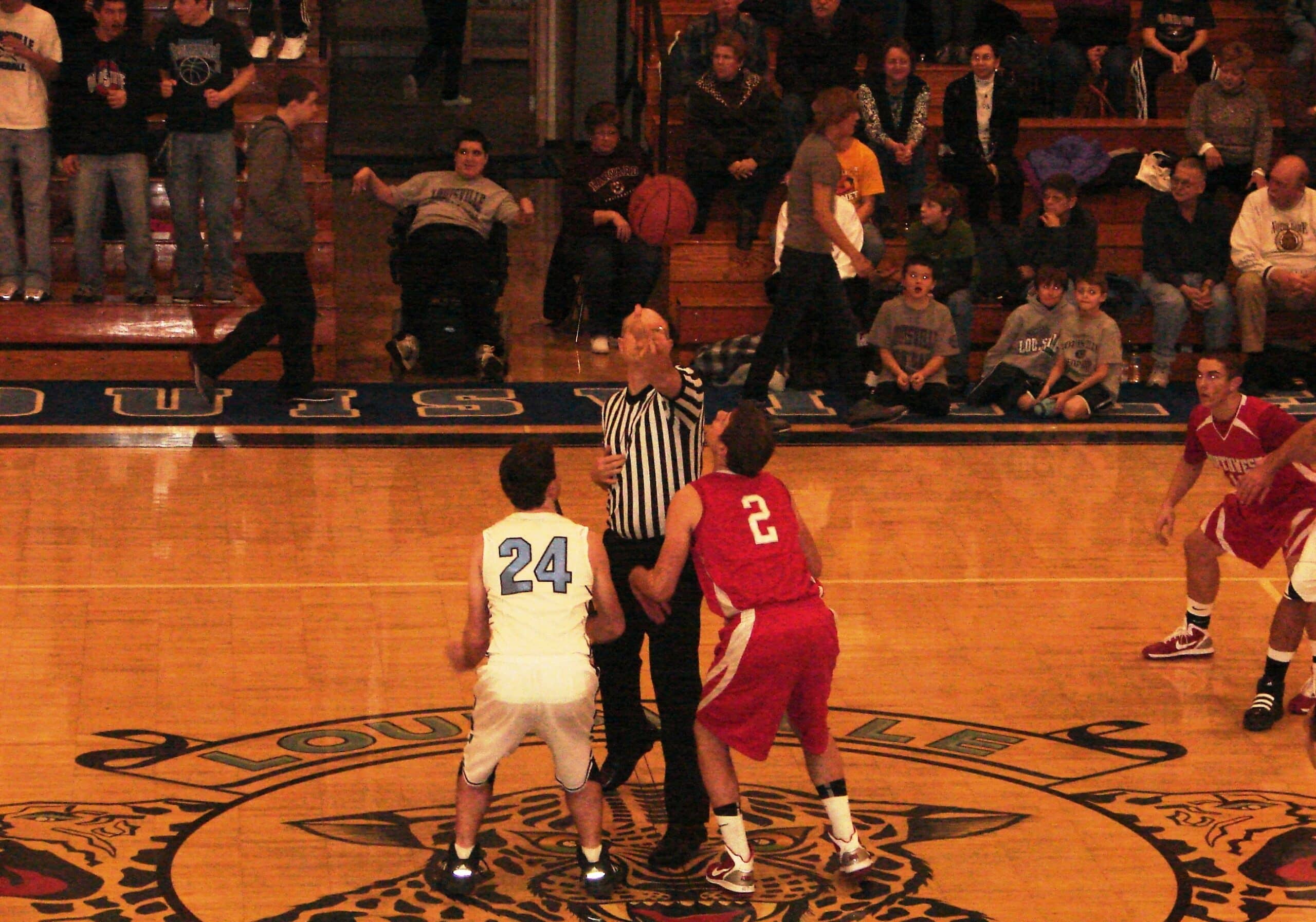 Owen Gramoy poured in 27 points and tied his own Leopards single game record with 7 three-pointers, but Louisville (7-5, 6-3) still fell to Northwest (7-4, 5-4) 56-54 Friday night.  A third quarter of miscues and missed opportunities in the fourth quarter sent the Leopards to their second straight loss in the NBC. The story of the first half was simply the Owen show.  Gramoy was unconscious from beyond the arch as he hit 4 of his 5 first half threes to end the second quarter.  Gramoy’s run started after Northwest scored 6 quick points to cut the Leopards lead to 21-20.  Gramoy then hit a jumper in the lane, before Northwest’s Cory Hoffman connected on triple to tie the game back up at 23.  But, Gramoy answered with back-to-back treys of his own and the senior shooting guard wasn’t finished.  He hit two more from downtown in the final 38 seconds of the second quarter to give Louisville a 35-27 lead at the break.  In a span of 4:22, Gramoy scored Louisville’s final 14 points to close the quarter.

The student section proudly chanted “You can’t stop him!” and their proclamation rang true in the next period as well.  Gramoy dropped in 8 more points and hit 2 more three-balls to lead the Leopards offense in the third quarter.

Unfortunately Gramoy’s long ball wasn’t the only story after halftime.  The Leopards built a 39-27 lead, but were then shutout for the next 3:43.  The Indians defensive pressure forced Louisville to turn the ball over in 6 of their next 7 possessions.  All six turnovers were steals by Northwest and half of them resulted in quick fast break scores.  The Indians 10-0 run cut the deficit to 39-37 before Gramoy banged home a short jumper in the lane.

Shortly after that, a downtown clinic ensued.  Dan May hit a three-pointer for the Indians to make it 41-40, but Gramoy dialed up a three to regain a two possession advantage for the Leps.  Northwest’s Shane Hippli swished a three-pointer on the following possession, but a few possessions later Gramoy answered again with his seventh triple of the contest.  With that basket, Gramoy tied his own Louisville record for three-pointers in a single contest.

Before the end of the third, Toby Minster scored on a lay-in and hit the free throw that came with it to give the Leps a 6-point advantage.  Minster finished with 14 points and 10 rebounds on the evening.

However, the Indians Hoffman continued the quarter’s theme by netting home a triple in the corner to give Northwest the momentum heading into the fourth quarter down by just four.  Hoffman led Indians with 20 points and banged home 4 three-pointers.

Northwest opened up the fourth quarter with a 6-0 run to take a 52-50 lead.  The Indians success was in large part due to the Leopards offensive flaws and consequently Louisville did not score until Gramoy drove to the hoop with 4:04 left to tie the game at 52 all.

An Adam Boswell bucket off the glass gave the Indians a 54-52 lead with 3:27 to go.  Boswell finished with 15 points.  The Indians then clung to their small advantage by successfully stalling out most of the clock.  With 1:28 remaining, Mike Millard hit a pair of free throws to put the Tribe up 56-52.

The Indians defense pressured the Leopards and nearly created turnovers from simple passes.  Mitch Sluss forced a foul and banged home two free throws to cut the deficit to 56-54 with half of a minute remaining.  Hoffman missed the 1-and-1 and Minster brought down the rebound to give the Leopards one last chance.  After a timeout, Louisville had 20.9 seconds to work with and they decided to go for the win.  Gramoy missed a long three and Sluss air-balled a three-pointer in the corner.  Millard out-wrestled Minster for the rebound and before a foul was called the horn sounded.  Millard threw the ball in the air and part of the Northwest student section charged the court.  The final game of this NBC rivalry belonged to the Indians.  That is unless the two teams meet in Canton…

NEXT GAME: The Leopards will host Central Catholic on Tuesday, January 25.  JV will tip-off at 6:00, while Varsity will start at approximately 7:30. Jake O’brien scored 11 points and hit 2 three-pointers to lead the Leopards JV team to their 11th win in 12 games.  After playing to an 8-7 advantage in the first quarter, Louisville built a double digit lead by halftime (23-13).  Louisville remained in-charge in the third quarter, only allowing Northwest to get within 32-24.  Northwest got two quick buckets to start the final frame, before Louisville stalled out most of the quarter.  Northwest got within 40-38 with just 13 ticks left on the clock, but Jeremy McQuilkin hit two clutch free throws and the Leps defense held on for the victory.  Alex Schooley and Billy Lairson also combined for 15 points to help the Leps.