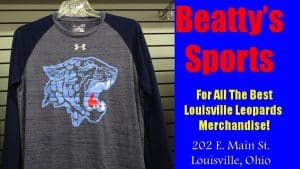 For the second time this week, Louisville overcome an early 2-0 deficit in a conference game. Minerva jumped on the board first when Maddie Phillips blasted a 2-run homer over the left field fence in the opening inning.

The Leopards answered back with a pair of 3-run innings in the third and fourth frames. With two outs, Kaycee Ollis ripped a 3-run homer over the right field fence to put Louisville ahead 3-2. Both Peyton McKeever and Sydney McKeever, who each singled earlier in the inning, came home on the dinger. The home run was the 7th of the season for Ollis and 18th for the Lady Leopards as a team.

Louisville used small ball to add to their lead in the fourth inning. Rylee Squire singled to left field to start the inning and that was the only

time the ball left the infield. After two outs, Sydney McKeever reached base on error and Teagan Rice drew a 4-pitch walk. With the bases loaded, Ollis singled home Peyton McKeever on a hard hit ground ball to the pitcher. Next, Sarah Cantley worked the count full before drawing a walk to score Sydney McKeever from third. Finally, Savannah Miner singled to the shortstop at the edge of the infield scoring Rice to make it 6-2.

Rice finished 3-for-3 with 3 runs scored. She also came home in the bottom of the sixth when Cantley doubled to left field. Cantley and Ollis both went 2-for-3 at the dish and Miner went 3-for-4. Louisville out-hit Minerva 13-5 for the game.

UP NEXT: The Lady Leopards will next take on the Lake Blue Streaks in the DI Massillon District Semifinals on Tuesday, May 19. First pitch is set for 5:00 PM at the Eagles #190 Sports Complex on the campus of Massillon Washington High School.

Cover Photo Taken By Frank Clapper of The Louisville Herald

View & Purchase Louisville Leopards Softball Pictures from the The Louisville Herald and view more photos in this week’s edition!