Despite the game being played at Lake, the blue seating & Louisville student section made the Lady 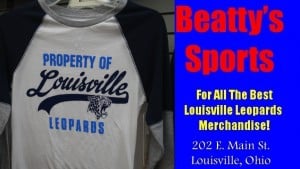 Leps feel like they were at a more familiar “L-H-S.” Jake Pukys took on the challenge to do push-ups for every single Louisville point scored, which totaled 325 after the first set.

In the Sectional Final against Wooster, Louisville took an early 2-0 advantage with a first set victory of 25-19 and a come from behind 25-22 win in the second set. The Generals did the unfathomable in erasing a 24-20 Leopard lead in the third set by scoring the final 6 points to win 26-24.

The Lady Leopards regrouped to win the final fourth set 25-22 to win their fourth DI Sectional in the past 5 seasons. Leaders included Guist with 14 kills, Shadle with 45 assists, Emily Hollifield with 4 blocks, and Rachel Mathie with a team-high 18 digs & 13 points serving.

Louisville would fall to second seeded GlenOak six days later in the District Semifinals. Yet, with a core of underclassman coming back & a drop to Division II, the 2015 Lady Leopards season looks to be a special one!