Lake High School was the tournament host, but an outside observer may have thought they were at 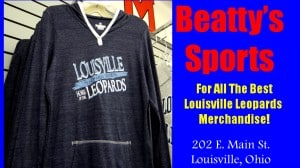 Louisville. Not only did the Lady Leopards feel at home with the giant painted letters of “L-H-S” on the closed bleachers behind them, but Louisville also brought a student section that drowned out all other cheering. They counted up to every score change and one brave fan, Jake Pukys, did a push-up for every point number in the first set and a squat for every point in the second set (25! or 325 of each).

Pukys ran out of steam for the third set, but the Lady Leopards did not. Louisville opened up the set by taking a 7-2 advantage and then extended their lead to 18-10. The Blue Streaks then ripped off four straight points and Leopards Head Coach Jodie Cress called time. Louisville answered by scoring 7 of the final 9 points to take the set and the match.

This is the third straight time these two squads have met to open tournament play. The Blue Streaks took the 2012 meeting and the Lady Leopards have won the last two years. Louisville has now won 5 out of their last 6 matches on the road against Lake and has taken the last 3 three meetings in the series overall.

UP NEXT: The Lady Leopards will next take on the #6 Seed Wooster Generals in the DI Uniontown Sectional Finals at Lake High School on Wednesday, October 15 at 7:30 PM.