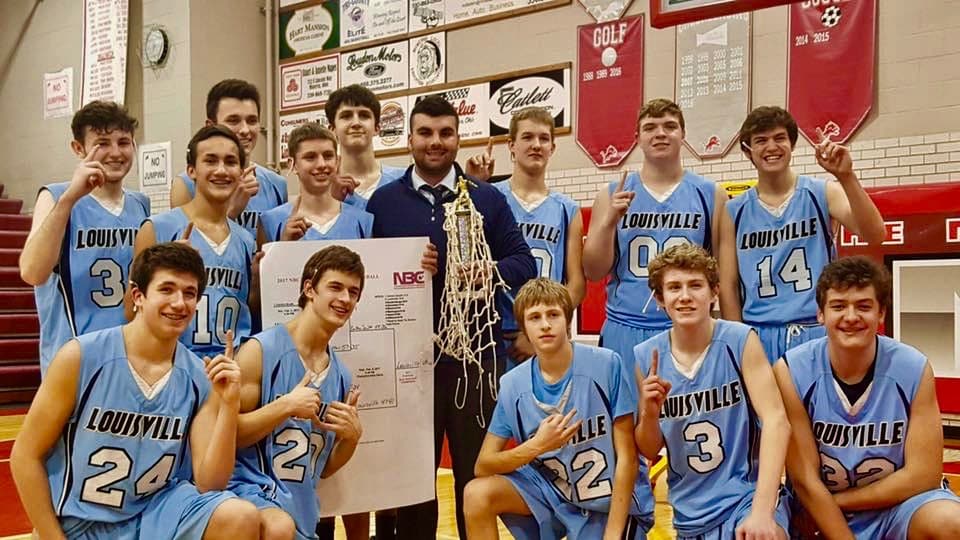 defeated the Top Seeded Canton South Wildcats 49-44 to claim the NBC Tournament Championship. With the victory, Louisville finishes the 2016-17 campaign with an overall record of 18-5 and an undefeated NBC mark of 14-0.

Scott Gronow scored a team-high 14 points and Collin Chambers finished with 10 to lead the Leopards. Both Ryan Pukys and Carter Rode added 8 each for Louisville as well.

The Leopards set the tone early taking an 11-2 lead at the end of the first quarter. Gronow dropped home half of his team-high in points during that period alone. Louisville continued to roll in the second quarter in outscoring Canton South 19-12 to take a 30-14 lead at halftime.

The Wildcats clawed back in the second half. They edged the Leopards 11-7 in the third quarter to pull within 37-25 heading into the final quarter. South continued their comeback in the fourth quarter dropping home 19 points to shrink the Louisville lead to single digits.

The Leopards used the charity stride, making 10 of 11 in the final frame, to seal the game and another title. Chambers and Pukys each made 4 of 4 free throws in the final period, and Gronow sunk home a pair as well.

The game was essentially decided at the line as Louisville shot 83% (15 of 18) for the contest compared to Canton South making just 60% (18 of 30) of their freebies. While the Wildcats did make 13 of 14 free throw attempts in the fourth quarter, they made only 31% (5 of 16) of their shots from the line through the first three quarters.

The Wildcats were led by Karovic who poured in a game-high 16. Patterson also had 9 and Long scored 8. Canton South finishes their season with a record of 19-3. All three of their defeats came at the hands of Louisville.