October 18, 2002 was a bittersweet night for the Louisville Leopards Football team. They mauled the host Marlington Dukes 35-3 to clinch a share of their fourth straight NBC Title, but in the process lost their star runningback to injury.

“We’ll see what type of team we are. We can sit around and cry about this or take this as a challenge,” Head Coach Paul Farrah said following the contest. “With the seniors we have, I think we’ll take the latter. We’ll buckle it up and see why this is a team game.” 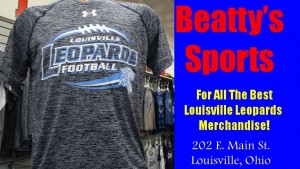 contest with an injury. Elsass broke free for a 21 yard touchdown run to open the scoring in the first quarter.

Despite the injuries at runningback, Louisville out-rushed Marlington 270-75 for the game. Quarterback Gary Whaley provided additional aide to the running game with with a pair of second half touchdown runs. He also connected with Nick Vernon for an 11 yard touchdown pass to help the Leopards go ahead 14-0 at the end of the first quarter. Whaley finished with 92 yards through the air for the evening.

Louisville’s defense dominated in their ninth straight win of the year. They held the Dukes to just 87 yards of offense and Marlington finished just 1 of 10 passing for 12 yards. The Leopards finished with 25 first downs for the game, while surrendering just 6 to the Dukes.