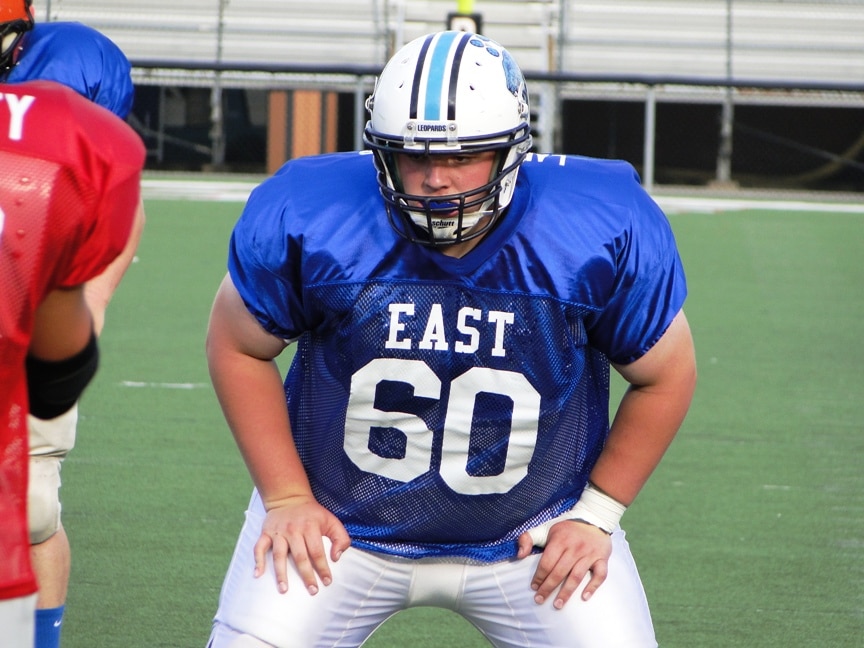 The Leopards only had three players participate in the East-West All-Star game, but all three made an impact in the outcome of the game.  The East defeated the West 27-22 at Fawcett Stadium Saturday Night.

The East All-Stars jumped out to a 14-0 lead, while the West answered back with two unanswered touchdowns to tie the game.  Louisville runningback Lucas Poyser awaited patiently during this time for his moment to shine.  It came with 1:49 left in the third quarter when he plunged up the middle and dived into the endzone from one yard out.  His touchdown gave the East a 21-14 lead heading into the fourth quarter.

The West took the lead and converted a two-point conversion midway through the fourth quarter to take a 22-21 lead.  The East had one more opportunity and they seized it.  Louisville lineman Sam Pickens had anchored the East offense at center all night long and in this drive he did the same.  Poyser also had multiple runs on the drive to inch the East closer to a game-winning score.  Finally, the three-headed Leopard monster wouldn’t be complete without mentioning Cole Lautzenheiser who’s block paved a clear road to the endzone for Minerva’s Zach Wade.  The touchdown came with just 25 seconds left in the game and it would prove to be the game-winner in the East’s 27-22 win.

Former Leopard quarterback Jon Aljancic was inducted into the Stark County High School Football Hall of Fame at halftime of the game.  Aljancic led Louisville to their first two playoff appearances in 1991 and 1992.  He also earned honors that included All-NBC, All-County, and All-Ohio.  After high school he played both baseball and football at Dartmouth University.