The Louisville Leopards competed in the DI North Canton District Meet this past Wednesday & Friday at Memorial Stadium. The Boys scored a total of 41 points to place 7th Out of 14 teams and the Girls tallied a score of 67 to place 4th Out of 13 teams. 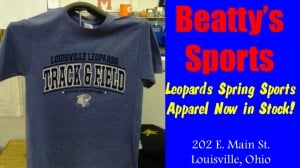 Guiley, Adriana Beaver, Devin Kring, and Lizzy Mont stayed strong and recorded a time of 49.80 to capture first place. Kring also won the 300 Meter Hurdles individually with a time of 46.72.

Mitch Cavalier led the Boys by placing second in the High Jump and fourth in the Long Jump. The 4×800 Meter Relay team of Andrew Milburn, Noah Chaplik, Nick Thomas, and Nick Chaplik also finished in fourth place to qualify for Regionals.

UP NEXT: The Leopards who qualified will participate in the DI Youngstown Regional Meet