The Louisville Leopards Varsity Football Team fell in a shootout against the host Alliance Aviators 49-34 Friday Night at Mount Union Stadium. With the loss, Louisville falls to 1-4 at the midway point of the season and drops to an even 1-1 in the NBC.

Sophomore Quarterback Colton Jones completed 19 of 25 passes for 180 yards and threw 2 touchdowns all in the second half to lead the Leopards. Sophomore Wide Receiver Davis Burick also made 12 catches for 108 yards and caught a pair of touchdowns for Louisville.

The Leopards found success early on both sides of the ball. The Louisville defense came up with a big fourth down stop near midfield to setup their first scoring drive. A 16 yard run by Runningback Nathan Guiley gave the Leopards a first down on the Aviators 30. Then Starting Quarterback Jared Mathie found Bryce Zuppe for a pair of 11 yard completions to move the chains two more times. On the next play, Runningback Gavin VanZant dodged a pair of defenders and plowed through another to get into the endzone from 7 yards out. 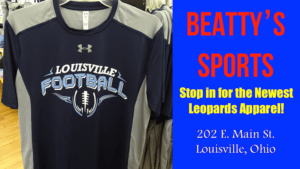 The Aviators answered back to knot the game at 7-7 on a 46 yard touchdown pass from Quarterback Howard Frazier to Tyler Williams. But the track meet continued with the Leopards storming down the field on the next drive. Mathie connected with Wide Receiver Ryan Pukys for a 36 yard completion on the first play of the drive. On the next play, Mathie launched a 33 yard pass to Burick in the endzone to put Louisville ahead 14-7.

That lead would be their last of the night as the Alliance defense forced 4 Leopards first half turnovers. As a result, the Aviators would score 28 straight points to take a commanding 35-14 lead with 4:35 left in the second quarter.

First, a pass was tipped at the line and was intercepted by Linebacker Sta’Quan Mason setting Alliance up on the Louisville 16. Back-to-back runs by Runningback Duce Johnson put AHS into the endzone to knot the game at 14-14.

On the Leopards next play from scrimmage, Aviators Defensive Back Kendall Richardson stripped the ball from an LHS receiver. Fellow defensive backs Davion Baker and Queshawn Martin pounced on the ball simultaneously at the Louisville 37. Three plays later, Frazier hit Wide Receiver Tyler Johns for a 33 yard touchdown on the first play of the second quarter to give Alliance their first lead of the game at 20-14.

Frazier took matters into his own hands on defense by picking off the Leopards on the ensuing drive and returning the ball to midfield. Three plays later, Duce (Johnson) broke loose again scoring from 30 yards away. Frazier also found Williams in the back left corner of the endzone to make up for an earlier failed conversion attempt.

The Aviators defense forced a three-and-out on the next Louisville drive. After the punt, Alliance marched 54 yards on 5 plays to pull ahead 35-14. The scoring play was a 35 yard pass from Frazier to Johns. That combination would hook up for 4 catches for 114 yards on the night. Frazier overall completed 8 of 13 passes for 182 yards for AHS.

The Aviators defense continued to ambush the pocket and that led to their fourth takeaway later on in the second quarter. Linebacker Marcus Davis provided the pressure and the pass floated in the air near the line of scrimmage. Defensive End Anthony Young dived face forward and intercepted the pass to set up another short field for Alliance at the Louisville 32.

The Leopards finally caught a break when the Aviators attempted a lateral pass to the left that missed its mark and landed on the turf. The two teams stood frozen for a hot second before realizing the whistle hadn’t blown. Then Louisville Defensive Back Dillon Rebuck scooped the ball up and raced 71 yards to the house to give the Leopards some new life at 35-20.

But in true shootout fashion, Alliance answered back immediately when Jeff Talbert  returned the ensuing kickoff 75 yards for an Aviator score. Alliance added one more score to their total in the third quarter following an 11 play, 68 yard drive that chewed off a significant amount of clock. Johnson scored from 17 yards out for his third touchdown of the night to give the Aviators a commanding 49-20 advantage. Johnson carried the ball 34 times for game-high 217 yards rushing.

Louisville mounted a partial comeback after that, but simply ran out of time. Both Leopard scoring drives ended in Jones touchdown passes to fellow Sophomores. Jones connected with Pukys from 21 yards out and Burick again from 5 yards away. Louisville was driving to get within a single score late in the contest, but that drive stalled at the Alliance 23 when a 4th-and-4 attempt fell incomplete. The Leopards also drove as far as the Aviator 22 on their final drive before the final gun sounded.

Jones replaced Mathie at halftime due to the continuing effects of the injury Mathie suffered at the end of the Marlington game last week. Mathie finished 15 of 27 for 177 yards through the air. Both Quarterbacks spread out the ball well to their receiving core that included Zuppe who had 7 catches for 78 yards, Pukys who finished with 6 catches for 97 yards, Logan Thomas who made 5 receptions for 47 yards, and Jack Davis made 3 grabs for 27 yards.

The loss snaps the Leopards streak of 10 straight wins over the Aviators . This is the first time Alliance has defeated Louisville since they won 13-7 on September 15, 2006 and the first time they have defeated the Leopards on their home field since a 28-7 win on September 11, 1987. Louisville still leads the all-time series 15-5-1, which includes an 8-3 mark at Alliance. With 83 points scored, this is the highest scoring game in the series eclipsing the 70 points scored in the 2014 game. This is only the Leopards second loss in 30 league games.

UP NEXT: The Leopards will next travel to Minerva to take on the Lions on Friday, September 29. Game Time is set for 7:00 PM from Hines Stadium.