Louisville surrendered the final eight points of the game which turned a hotly contested DI Akron Sectional Final matchup into a 47-38 win for host New Philadelphia. With the loss, the Lady Leopards finish the 2014-15 campaign with a final record of 13-10.

Abby Beaver, Sabryna Benzel, and Sarah Lairson all finished with 9 points each to lead Louisville. Benzel also snagged a team-high 11 rebounds and had a game-leading 2 blocks. Lairson and Alexa Oberster also finished with 3 steals a piece. 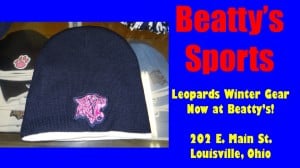 Louisville trailed 35-27 heading into the fourth.  The Leopards answered back with an 8-1 run to start the final period to knot the game at 36-all with 3:53 left to play. A basket by Benzel kick-started the run. A few plays later, Grace Jackson’s steal and hustle led to a fast break score by Lairson.

After that, Oberster converted a bonus opportunity into a pair of made free throws to tie the game. However, New Philadelphia snatched the lead right back when Morgan McMillen buried a three-pointer just seconds later on the other end.

With two minutes to go, the Leopards would trim the Quaker lead to the narrowest of margins when Benzel scored off a Lairson in-bound pass. But a half minute later, McMillen connected on her fourth three-ball of the night to put New Philadelphia back up 42-38. The DI AP Poll Champion Quakers would hit 5 of 6 free throws down the final stretch to ice the game and improve to 23-1 on the season.

Jaida Carter finished with game-highs of 27 points, 11 rebounds, and 4 steals to lead the Quakers. McMillen also tallied 13 points and 3 steals for New Philadelphia.

A look back at the 2019 Louisville Leopards Girls Soccer Season: louisvilleleopards.org/soccer/girls/h… #FlashbackFriday 14 hours ago

A look back at the 2019 Louisville Leopards Boys Soccer Season: louisvilleleopards.org/soccer/boys/hi… #FlashbackFriday 14 hours ago

A look back at the 2019 Louisville Leopards Girls Cross Country Season: louisvilleleopards.org/cross-country/… #FlashbackFriday @XcLouisville 14 hours ago

A look back at the 2019 Louisville Leopards Boys Cross Country Season: louisvilleleopards.org/cross-country/… #FlashbackFriday @louisville_xc 14 hours ago