The Louisville Lady Leopards Soccer team’s 2012 season was without a doubt the best in school history. They had already set the school record for most wins, most goals, longest winning streak, and brought home the first ever NBC Soccer Championship to Louisville. But even after all of that, no victory was sweeter than their Double Overtime DI Sectional Final 2-1 victory over host North Canton Hoover on October 18, 2012.

Things didn’t look good early for the Leopards as the Vikings took a 1-0 lead just 3:23 into the match. Playing from behind early was recipe for a blowout and the game could have easily gotten away. But not this Louisville team, not on this night.

For the remaining 94 minutes of the contest the Lady Leopards shutout the Lady Vikings. Louisville 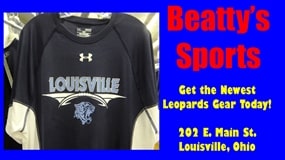 stayed alive offensively too and they managed to knot up the game at 1-1 with 27:30 left in the first half. Sarah Jaroszyk’s inbound throw was taken by Rachel Baughman. After that, Baughman booted the ball towards the right side of the goal and Lizzy Mont found the net after that.

Nearly 86 minutes later, Louisville caught the break they needed. In double overtime, Sami Keefe passed the ball to midfield and it was retrieved by the sprinting Baughman. She dribbled past defenders and leaped over the goalie to avoid a collision, but not before she gave the ball one final boot towards the net. The ball crept into the goal and for the first time in LHS History the Lady Leopards were Sectional Champions!

Louisville fell at Jackson in the District Semifinals to finish the season 15-3-1 overall. With a young crew, Lady Leopards Soccer will again look to make history during the upcoming season!