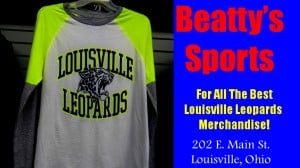 Emily Hollifield took over the match, as she led the Lady Leopards in four statistical categories. Here team-highs included 15 Kills, 10 Digs, 6 Blocks, and 8 points & 4 aces serving. Three of those aces were served up consecutively late in the clinching third set. Haley Shadle also had 32 assists to lead Louisville.

The Wildcats stormed out of the gate taking an 8-2 advantage in the first set, but the Leopards rallied to edge them 26-24. Canton South was led by Anna Morrow with 16 Kills, Beth Myers with 3 Blocks, Julie Morris with 13 Digs, Vannie Forshey with 19 Assists, and Saxyn Ledgu with 11 point & 7 aces serving. With the loss, the Lady Wildcats fell to 3-14 overall and 3-8 in NBC play.

UP NEXT: The Lady Leopards will next compete at the Jackson Invitational on Saturday, September 26 beginning at 9:00 AM.