Sarah Cantley crushed a solo home run to center field off the roof of the ticket booth which gave the Leopards a 3-2 lead with one out in the bottom of the sixth. Cantley helped her own cause with the blast before sending the Panthers down 1-2-3 in the seventh to earn the victory. She pitched a complete game 1-hitter and struck out 8 to improve to 13-3 on the season.

Cantley and Perry’s Payton Gottshall found themselves in a pitcher’s duel early on. The two combined for 10 strikeouts and no hits through 2 1/2 innings of work in the circle. The trend appeared to continue in the bottom of the third when Gottshall struck out the first two Louisville batters to start the inning, but the Lady Leopards had other plans.

Just as they had down all season long, LHS continued their 2-out magic. Sydney McKeever drew a 2-out walk and then landed on third via a bloop base hit by Teagan Rice that found the grass just inside the left field line. Rice ended up on second during the play to put both runners in scoring position. In the next at-bat Kaycee Ollis worked the count full. On the payoff pitch, she whacked a hard ground ball through the middle of the infield that brought home both runners to put Louisville up 2-0.

The relentless Panthers answered right back in the top of the fourth. With 1 out, Gottshall walked on four pitches. Then Alycia Cunningham made the Leopards pay by leaving the ballpark with a 2-run line drive home run to knot the game at 2-2. The game-tying blast would be Perry’s only hit of the game.

Cantley locked in after giving up the lead. She faced the minimum the rest of the way in facing 11 Panthers and getting 11 outs. Perry’s only baserunner after Cunningham was M Talbot who reached on an infield error to lead off the fifth. Her threat was short-lived as she was called out for leaving early two pitches later.

Cantley retired the final 8 remaining batters and hit a round tripper in-between her dominance in the circle to seal the victory. She got Gottshall, who homered off her in last year’s District Championship Game, to hit a hard line out to the stabbing glove of Rice to end the sixth.

Cantley continued into the seventh facing her past and rewriting history. Cunningham, who homered off her earlier in the game, grounded out to McKeever at second. Then Gia Durieux, who also went yard against Cantley in last year’s District Title game, chopped a short grounder perfectly placed between the pitcher’s circle and home plate. Cantley gave way to the catching Ollis who in one single motion scooped the ball up and threw to first. The throw was low, but first baseman Alex Fankhauser dug it out for the second out.

Finally, Cantley got K Wilson to hit a high pop up near the first baseline. Fankhauser squeezed it and the Lady Leopards clinched their second straight birth in the Division I Massillon District Championship game.

This marks Louisville’s first ever tournament victory over Perry in this their sixth postseason meeting. The Panthers had outscored the Leopards 21-1 in their previous 5 tournament games with their only run coming in an 8-1 AAA North Canton Sectional loss in 1989. Louisville has taken 4 of the last 5 meetings against Perry overall, but the Leopards still trail the all-time series 12-25.

Louisville has now advanced to 6 District Finals in team history with half of them coming in Division I. In the 34 previous year’s in program history, the Lady Leopards have failed to advance to Regionals. They will have a chance to rewrite history Wednesday when the take on the top seeded Blue Streaks with the District Crown on the line.

UP NEXT: The Louisville Leopards Softball Team will next take on the top seeded Lake Blue Streaks in the DI Massillon District Championship on Wednesday, May 15 at 5:00 PM from WHS’s Eagles #190 Sports Complex in Massillon. 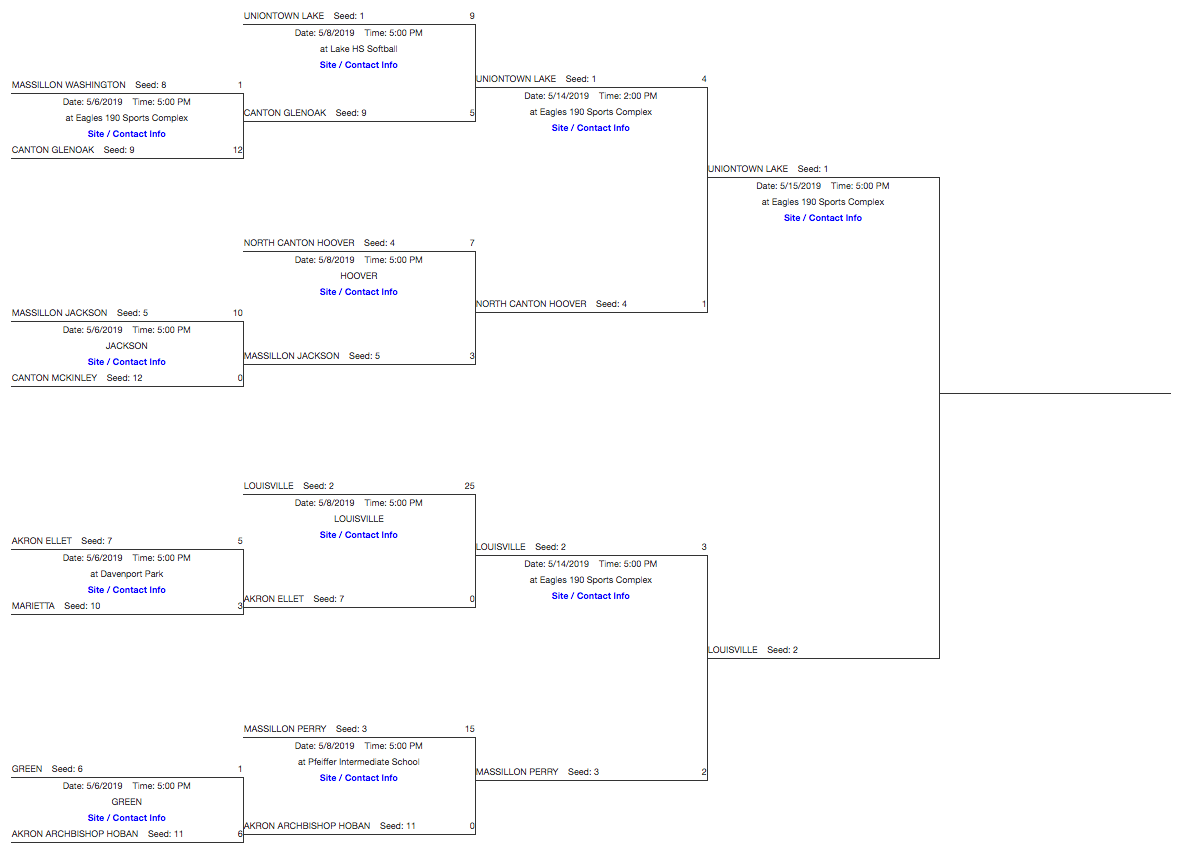