Aurora Quarterback George Bollas scored three touchdowns including the game winner from 22 yards out with 1:19 remaining to lift the Greenmen past the host Leopards at Louisville Leopards Stadium Friday. Aurora won the DIII, Region 7 Quarterfinal matchup 24-21.

The Greenmen would finish the evening with 405 rushing yards on 55 carries. Bollas ran for a team-high 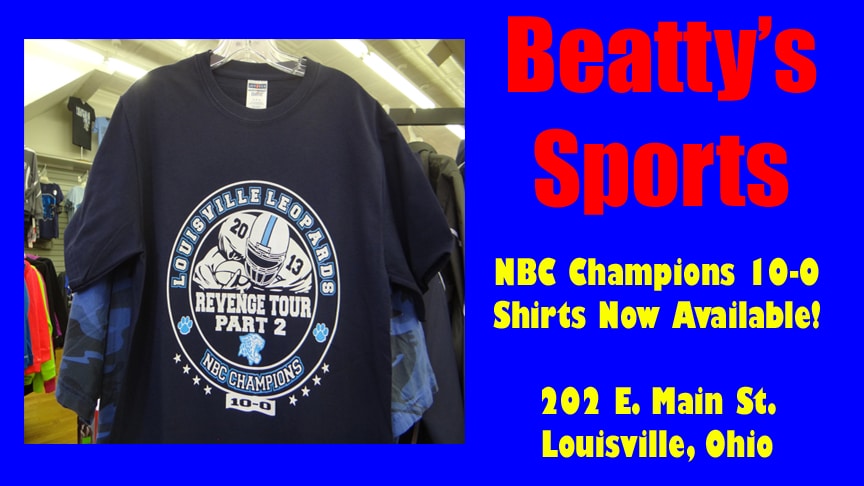 211 yards on 26 carries and Kirk Janoch also broke the century mark with 112 yards on 10 carries. Bollas scored a backbreaking touchdown on the opening drive of the game on a 3rd-and-15 from the Louisville 47. He would later score from 57 yards out on Aurora’s first drive of the second half.

The Leopards matched the Greenmen’s first quarter score with their most complete drive of the evening. Louisville converted three times on third down during a 9 play, 83 yard drive. Quarterback Connor Zwick would eventually find the endzone from a yard out to tie the game at 7-7.

Each team had opportunities to take control of the game, but could not capitalize on the opposing teams turnovers. AJ Minster came out of a pile up with a fumble and also recovered a fumble in the back of the endzone when Bollas fumbled the ball forward on the Leopards 1. Aurora’s Mike Stratton also picked off a pass and Mitch Deininger came out of a pile with a fumble recovery. As a result, the score remained tied 7-7 at the half.

After Bollas found the endzone for a second time, Janoch put the Greenmen in prime position to score again. He ran 61 yards to the Louisville 6. The Leopards defense slammed the door shut though and Joey Melchiori booted through a 21 yard field goal to put Aurora ahead 17-7 with 4:15 left in the third.

Things looked grim, but the Leopards found a way back into the game as they had done all year. Garrett Yoder took the ensuing kickoff back 32 yards to the Louisville 43. Then Zwick connected with Bryce Mathie and Andy Minster for first down completions. A few plays later Walter Schrock ran a counter play 21 yards on a 3rd-and-13. That led to an 8 yard touchdown pass from Zwick to Andy Minster that cut the deficit to 17-14. Zwick would finish the evening 10 of 21 passing for 103 yards.

Amazingly, Louisville would find the endzone again just 1:26 later via a 20 yard touchdown run from Schrock. The touchdown was setup by Frankie Falcone’s interception the play before. Schrock would finish with a team-high 78 yards on 14 carries. All of the sudden the Leopards led 21-17.

The Leopards defense slammed the door time and time again to keep the lead. Mathie intercepted a pass at midfield to halt the Greenmen’s ensuing drive. Yoder and Dylan Kline would also record sacks for huge losses leading to the end of Aurora drives. All and all it was superb performance by the Louisville defense that came up just 1:19 short of a Regional Semifinal birth.

The Aurora defense ended Louisville’s season by charging through for three sacks on the final Leopards offensive series of the year. Louisville finishes the 2013 campaign an impressive 10-1 and will look to build upon this experience in the coming years. Aurora will take on 2nd seeded Hubbard next Friday.

A look back at the 2019 Louisville Leopards Football Season: louisvilleleopards.org/football/varsi… #FlashbackFriday @DclubT 2 weeks ago

A look back at the 2019 Louisville Leopards Volleyball Season: louisvilleleopards.org/volleyball/var… #FlashbackFriday @LepsVball 2 weeks ago