The Leopard Boys Golf Team competed in the Alliance Lavery Chevrolet Classic on Monday at Alliance Country Club. The Leopards finished in 7th place out of 11 teams in the tournament with a team total score of 365..

Leading the Leopards were Caleb Prasco and Justin Shafer with a team low 86 a piece. Connor Wendt also tallied a 96 and Sam Casto rounded out the Louisville scoring with a 97. 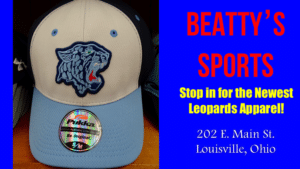 The Walsh Jesuit Warriors (Gold) won the tournament with a score of 322. The Perry Panthers, who were led by tournament medalist Gunnar McCollins low of 75, came in 2nd with a score of 329. Third place went to the Canton Canton Central Catholic Crusaders who ended the evening with a team score of 338.

UP NEXT: The Leopards will next host the Minerva Lions on Wednesday, August 30. Tee-time is set for 4:00 PM from Sleepy Hollow Country Club.

A look back at the 2019 Louisville Leopards Girls Soccer Season: louisvilleleopards.org/soccer/girls/h… #FlashbackFriday 15 hours ago

A look back at the 2019 Louisville Leopards Boys Soccer Season: louisvilleleopards.org/soccer/boys/hi… #FlashbackFriday 15 hours ago

A look back at the 2019 Louisville Leopards Girls Cross Country Season: louisvilleleopards.org/cross-country/… #FlashbackFriday @XcLouisville 15 hours ago

A look back at the 2019 Louisville Leopards Boys Cross Country Season: louisvilleleopards.org/cross-country/… #FlashbackFriday @louisville_xc 15 hours ago