Louisville Falls at Home to Wooster in 4 Sets – Volleyball

<<< Previous Vs. Jackson | Volleyball Schedule | Next At Tuslaw >>>

The Louisville Leopards Varsity Volleyball Team fell to the visiting Wooster Generals in four sets 16-25, 25-22, 17-25, 23-25 Thursday Evening at Louisville High School. The Lady Leopards have now lost four straight as they fall to 6-8 on the season.

Senior Lauren Siegfried was Louisville’s top server with 11 service points and 2 aces. She also guided the Lady Leopards offense with a team-high 20 assists.

Other leaders for Louisville included senior Paige Cole with a match-high 20 kills on offense and senior Sydney Bast with 19 digs on defense.

The Lady Generals were led by junior outside hitter Emmaleigh Allen who finished with a team-high 18 kills to go along with 13 digs on defense. Sophomore setter Marin Dixon also finished with a match-high 41 assists, junior middle hitter Ravin Morgan recorded 11 kills, and senior outside hitter Elena Wagoner threw down 8 kills to round out the offense.

On defense, Wooster was led by senior libero Cassidy Sims who finished with a match leading 31 digs to go along with 3 aces serving. Wagoner also had 11 digs defensively.

The Lady Generals have now defeated the Lady Leopards in each of the past two seasons .

UP NEXT: The Lady Leopards will next hit the road to take on the Tuslaw Mustangs on Monday, October 5. JV will begin at 5:30 PM and Varsity will follow around 6:30 PM.

Due to COVID-19 restrictions, the Lady Leopards Varsity Volleyball program celebrated Middle School Recognition night virtually for the 7th and 8th grade Louisville Volleyball teams. The middle school teams had a watch party via the live stream and the varsity team surprised them by popping in to say hello during the JV contest. 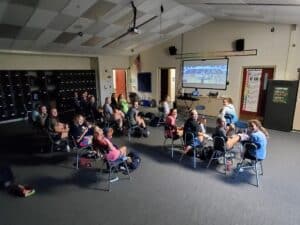 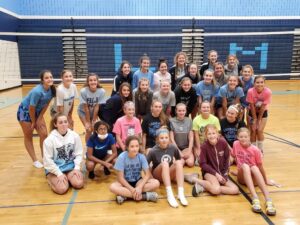