The Louisville defense shutout visiting West Branch until the fourth quarter during a 29-12 victory back on September 27, 2002.

Louisville’s defense held West Branch to only 117 yards through the first three quarters. They also recorded 5 sacks, had 3 other tackles for losses, and recovered 4 fumbles during a dominating performance. Adam Burris led the attack with a sack, tackle for loss, and a fumble recovery. 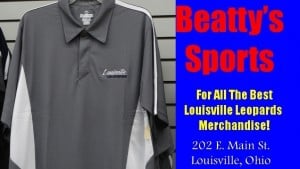 started at the West Branch 25, 2, and 38. Louisville Quarterback Gary Whaley threw a 23 yard touchdown pass to Huston Hinkle for the first score and a 20 yard touchdown pass to Mike Batdorff for the second score. Batdorff was the leading receiver on the night with 5 catches for 70 yards and Hinkle also made 2 receptions for 42 yards.

After the final botched punt, Brian Potts added a 25 yard field goal with 1:09 left in the second quarter. The Warriors responded by driving to the Leopards 8 just before halftime. However, they fumbled the ball away with 21 seconds left, which left the score 16-0 Louisville.

Whaley continued to roll in the third quarter when he found Justin Boudler for a 10 yard touchdown strike. To go along with his three touchdown passes, Whaley finished 13 of 22 for 168 yards.

Runningback Curtis Elsass also scored on a 3 yard touchdown run. This score gave the Leopards a 29-0 cushion early on in the fourth quarter.

The Warriors would find the endzone twice in the final quarter, but it would not be nearly enough. Josh Davis scored on a 6 yard run for their first touchdown and Nate Greenawalt found Josh Venables for a 7 yard touchdown pass after that.