The Louisville Leopards Girls Golf Team won the Tri-County Postseason Tournament for the second straight year Thursday at Zoar Golf Club. Louisville blew away the competition finishing with a team total score of 311, which was 48 strokes ahead of second place Canton Central Catholic.

Senior Katie Bice shot a match low 76 to lead the Lady Leopards and finish as tournament medalist. Bice shot 37 on the front nine and 39 on the back nine to take first place individually by only a single stroke.

Senior Madison Gruber got off to an even hotter start for Louisville in recording a 36 on the front nine. She would go on to shoot 41 on the back nine to tie Marlington’s Maria Warner for second place individually with a total score of 77.

The junior tandem of Alexis Ralston and Erin Strouse rounded out the Lady Leopards scoring by shooting 79 each and tying for fifth place individually. The pair recorded the best two Louisville scores on the back nine as well. Strouse shot 37 on the back nine and Ralston tallied 38 in her final nine holes.

4 of the top 6 individual scores belonged to Louisville linksters. Devore from New Philadelphia also shot 78 as the only other non-Leopard in the top 6.

UP NEXT: The Lady Leopards will next compete at the DI Sectional Tournament on Wednesday, October 7. Tournament is set to begin at 9:00 AM from The Elms Country Club. 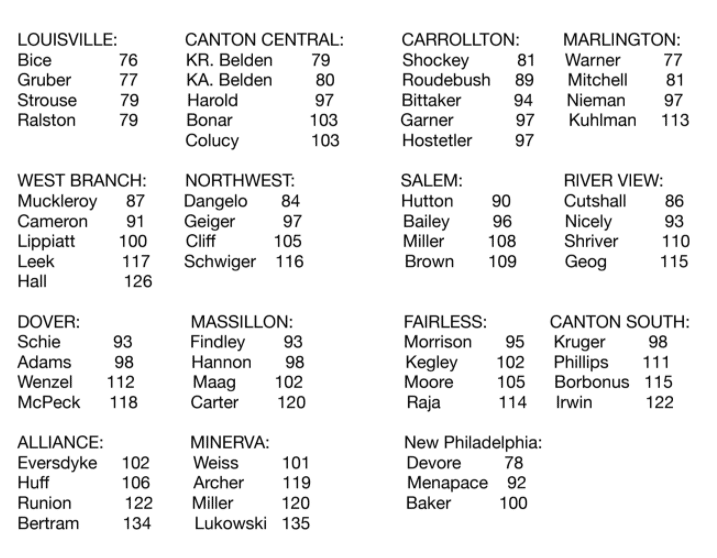