The Louisville Leopards downed the visiting West Branch Warriors 4-1 on Senior Night Thursday. With the victory, Louisville improves 16-2 overall and finishes a perfect 10-0 in NBC play. 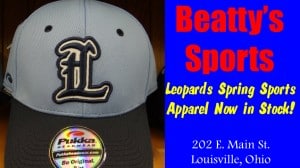 The Leopards have now defeated the Warriors 14 straight times and lead the all-time series 53-4. Louisville has now won 21 straight matches in the NBC and 33 out of the last 34 overall.

With the win, Coach Rod Hall earned his 100th Combined NBC Victory. Hall is now 60-12 in league play as the Boys Coach and 40-2 in conference play as the Coach of the Lady Leopards.

Before the contest Louisville honored their seven Seniors that included Tristan Begue, Brandon Garrett, Andy Hall, Nick Knebl, Vic Knebl, Chris Miller, and Hunter Williams. Leopard Nation would like to personally thank these seven Seniors for all the great memories and all the hard work they put in to make the Leopards Tennis program as dominant as it is.

UP NEXT: Louisville Leopards will next travel to Green to take on the Bulldogs on Monday, May 12 at 4:15 PM.