<<< Previous At New Philadelphia | Baseball Schedule | Next At Berlin Hiland>>>

The #5 seed Louisville Leopards Baseball Team shutout the visiting #19 seed Struthers Wildcats 8-0 in their DII Louisville Sectional Final on a rainy Wednesday Evening at Andy Aljancic Field. With the victory, Louisville improves to 18-9 on the season and advances to host the #3 seed Salem Quakers in the DII Louisville District Semifinals on Monday, May 23 at 5:00 PM.

Senior starting pitcher Anthony Warner pitched six shutout innings, allowed just two hits, and struck out 12 to lead the Leopards. He remains perfect with the victory improving to 7-0 on the season.

Warner carried a no-hitter into the fourth inning before it was broken up by a slow rolling infield single hit by senior third baseman Drew Day. Warner fanned the next four Struthers batters in response, which included striking out the side in the fifth inning. He also struck out the side earlier in the second inning and retired the side in order in the third inning.

First Postseason Shutout By Louisville Since 20

Sophomore pitcher Zach Root came on in relief in the seventh inning. Root issued a walk to start the frame, but then struck out the next hitter. On the same pitch, senior catch Walker Kandel threw to senior shortstop JT Popick at second base. Popick tagged the runner attempting to steal to complete the double play. Two hitters later, Root got the final out of the game on a swinging strike three to preserve the shutout.

This marks the first time the Leopards have shutout an opponent in the postseason since blanking visiting Fairless 10-0 in six innings in their 2012 sectional final matchup. The last seven inning tournament shutout posted by Louisville came in an 8-0 victory over Minerva in the 1996 DII sectional semifinals held at Fairless.

With the way Warner was dealing Wednesday evening, Louisville put the game away early with a three-spot in the bottom of the first. Popick singled on the first pitch of the inning to set the tone. He later scored on a wild pitch to give the Leopards the first advantage of the contest at 1-0.

The Leopards would tack on five more runs in the bottom of the fifth to rip the game wide open. Walks again came back to bite the Wildcats. Adelman and junior designated hitter Karson Siegfried each worked the count full before being issued a free pass to first base with just one out in the inning.

Miller delivered a base hit to right field in the following at-bat to bring in Adelman from second. Miller would also single in the sixth inning to finish 2-for-4 for the contest. Then senior third baseman Caleb Miller doubled to right field scoring Siegfried from third to put LHS ahead 5-0.

Louisville continued to add on to their lead in the fifth frame. With two outs, senior right fielder Zack Seaman used his speed to beat out an errant throw from short for an infield single which brought across freshman pinch runner Cooper Rice from third. Senior pinch runner Kyle Vesely also scored from second on the play following the overthrow to put the Leopards in front 7-0.

Two pitches later, Popick delivered his third hit of the evening on a line drive RBI single to left field that scored junior second baseman Connor Morley from third to up the Louisville lead to 8-0. Popick would match Struthers in total hits for the night going 3-for-4 at the plate as the Leopards out-hit the Wildcats 8-3 for the game.

Louisville has now won three sectional titles in their past four seasons of tournament play. This is the Leopards 17th Division II sectional championship since 1991.

Louisville is now 30-26 in the postseason while playing in Division II, which includes a 15-7 mark when playing at home in the Division II tournament all-time.

UP NEXT: The Louisville Baseball Team will next travel to take on the Berlin Hiland Hawks on Friday, May 20 at 7:00 PM. JV will also host Berlin Hiland on Friday at 5:00 PM. 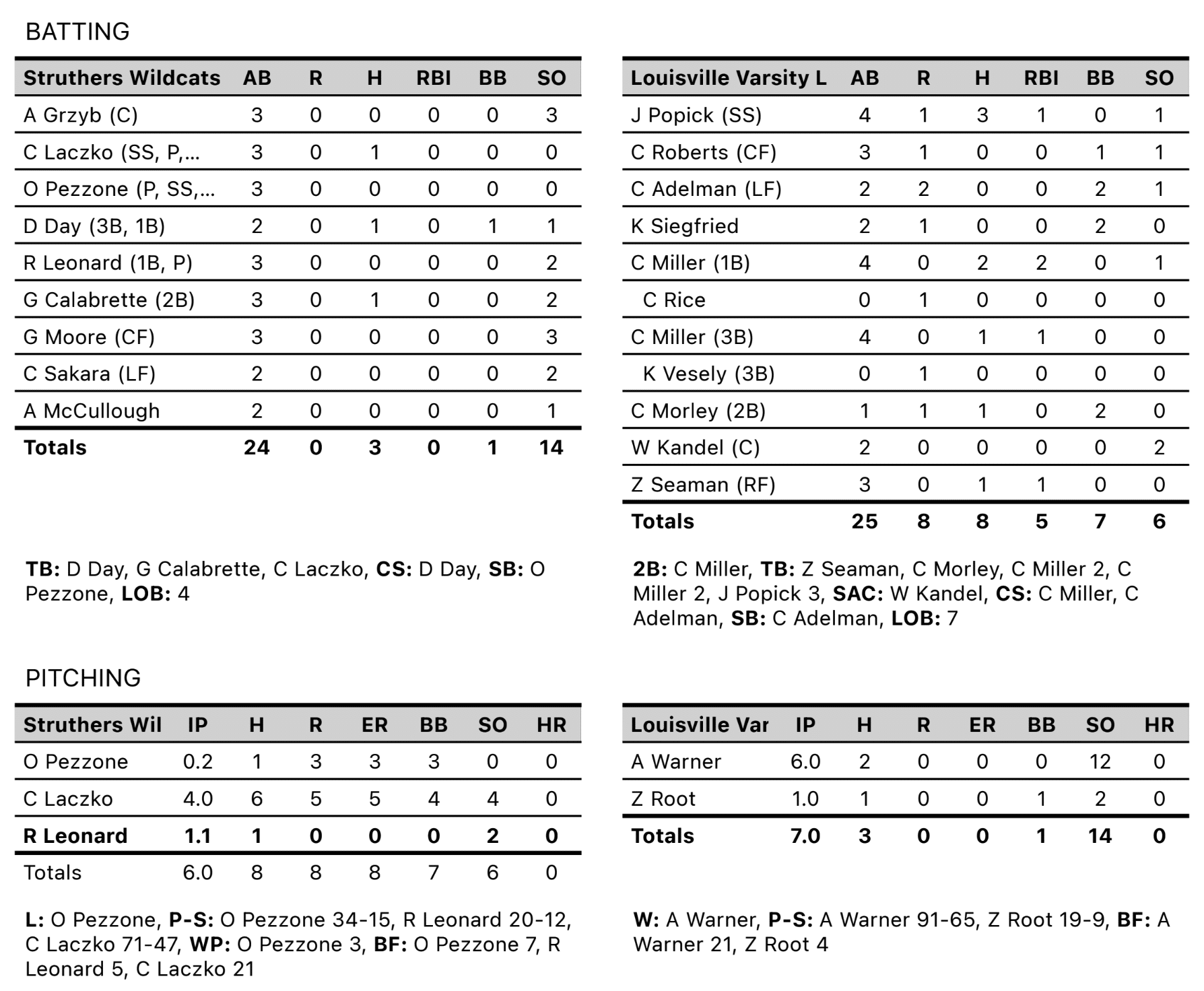