Senior Katie Bice led the Lady Leopards by shooting 19 over par 159 to tie with two other golfers for 25th individually. Bice birdied three times in her opening round on holes 1, 12, and 13. She finished Friday shooting 5 over par 75 and sat in ninth place individually. Bice would shoot 84 in her second round as well.

Junior Erin Strouse shot 22 over par 162 to finish tied for 33rd individually. Junior Alexis Ralston also shot 34 over par 174 and senior Madison Gruber finished 38 over par 178 to round out the Louisville scoring.

Junior Abby Davis also birdied on hole #14 in her opening round on Friday. She would finish 47 over par carding a 187 as the Lady Leopards fifth participant.

The New Albany Eagles won their third consecutive state championship after placing four individuals in the top 10. New Albany’s Madison Spiess shot 1 over par 141 over the course of the two days to finish as the individual state champion in Division I. Cara Heisterkamp (Magnificat) and Avery Wright (Jackson) placed second individually by shooting 4 over par 144.

New Albany finished 41 strokes ahead of second place Mason. The Eagles shot 26 over par 586 as a team. In comparison, the Comets finished 67 over par totaling 627. The Centerville Elks also came in third and the Green Bulldogs took fourth. Locally, the Jackson Polar Bears also came in sixth place. 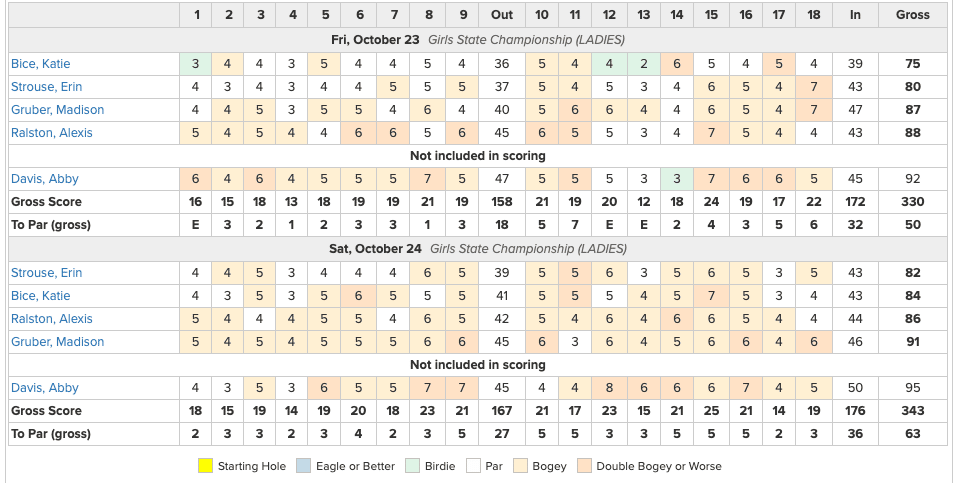