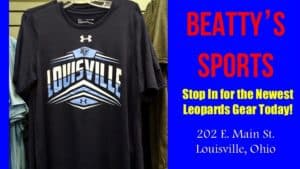 This past week it was decided that Louisville Leopards Volleyball Head Coach Jodie Cress would not return in 2019.

Cress is the winningest Leopards Volleyball Coach in program history just one win shy of a milestone 200th victory. Cress took over as Louisville Volleyball’s head coach in 2006 and has complied a record of 199-112 (.640) over the course of her 13 seasons at the helm. This included 4 outright NBC Titles and an overall league record of 128-40 (.762) in 12 competitive seasons in the Northeastern Buckeye Conference before the Leopards became an independent in 2018.

In both seasons the only team preventing the Leopards from a District Title was the prestigious Jackson Polar Bears. The Leopards were 21-3 in 2015 before running into state bound Jackson and also 22-2 in 2016 before running into the same Polar Bears. Before 2018’s Sectional Final against Lake, Jackson had won 75 consecutive sets in DI Sectional and District tournament games. The Polar Bears have won 27 straight Division I Sectional/District tournament games and claimed the last 8 District Championships overall. Despite being the underdog or smaller school in most matches, Cress finished with a record of 12-12 in Division I tournament play in 12 seasons and also went 1-1 in Division II for her inaugural season as coach in 2006.

More details to come when official minutes and documents are posted externally.