Six Jackson turnovers allowed Louisville to build a 28-0 second quarter lead before the host Leopards would go on to defeat the Polar Bears 35-12 on September 10, 1999.

Louisville set the tone early on their second drive of the game. Quarterback Jon Herbert hooked up with 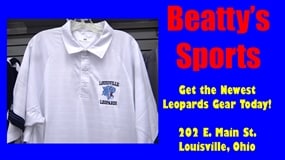 Wide Receiver Andy Shook for a 48 yard gain and also to Wide Receiver Vic McGoye for a 13 yard gain to the Jackson 4. On the next play, T.J. Barnes scored his first rushing touchdown of the season to give the Leps a 7-0 advantage.

“I think we knew we had the ability to play with anyone, but we had to prove it to ourselves,” Herbert said following the victory. “We’ve heard a lot about the second half of the North Canton game, and about finishing the game. We decided we didn’t want to hear that anymore.”

Herbert made sure talk of the opening week 35-7 loss to Hoover was completely silenced. Herbert would finish the evening with 176 passing yards, 65 rushing yards, a fumble recovery, an interception, a touchdown-saving tackle, and was part of four Leopard touchdowns.

Herbert’s 17 yard touchdown pass to McGoye put Louisville up 14-0. Herbert then intercepted a pass at midfield and two plays later ran 47 yards for a score. Then after the Polar Bears muffed a punt, he ended a six play drive with a 5 yard touchdown run. Just like that the Division III Louisville Leopards were leading the DI Jackson Polar Bears 28-0 with 5:09 left in the second quarter.

Jackson would score twice during the remainder of the contest, but in-between those touchdowns Herbert found Adam Reinford for a 23 yard score to put the final nail in the coffin. The Leopards finished with 313 total yards of offense and their victory snapped a 6-game losing streak to Federal League foes.

“This is a kind of win that can turn a season around,” Head Coach Rick Crislip described the 35-12 victory. “Our kids came ready to play and I’m proud of them. This builds a lot of confidence for us. It’s a building block.”