The Lake Blue Streaks scored three goals over the final 15:07 to down the visiting Louisville Leopards 5-3 in the DI Girls Soccer Austintown District Semifinals at Blue Streak Stadium Tuesday. With the loss, the Lady Leopards finish their best season ever at 15-2-1.

Lake got on the board first via a corner kick a little more than five minutes into the contest. Louisville knotted the game at 1-1 seven minutes later when Lizzy Mont found the left corner of the net after rebounding a shot taken by Rachel Baughman. For Mont, it was her 13th goal of the season and her 4th goal in 5 career tournament games played.

The Lady Streaks got a huge momentum boost when they scored on a fast break just 41 seconds before halftime. The Lady Leopards would not counter until Baughman found the net with 25:16 remaining in the second half. For Baughman it was her 31st goal of the season and 4th consecutive tournament contest with a goal. More importantly, it tied the game at 2-2.

Lake would snatch the game away about ten minutes later when they scored two goals in a span of 1:53 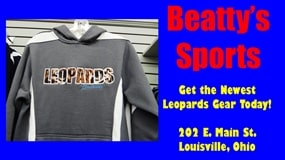 to take a 4-2 lead. Louisville showed their never say die attitude when Lizz Stefanik assisted Devin Kring on her first ever tournament goal at the 9:01 mark. For Kring it was her 9th goal of the 2013 campaign. It was a campaign the Lady Leopards saw slip away less than eight minutes later when the Lady Blue Streaks broke free for their fifth goal with 95 seconds remaining in the contest.

With the loss, Louisville is now 1-9-1 against Lake including a 1-5 record at Lake. The Blue Streaks have now won 9 of the last 10 matches in the series with the only non-victory being the tie earlier this season.

Louisville finishes the season 15-2-1 which marks the highest winning percentage for a Lady Leopards Soccer team ever and ties last year’s mark of 15 wins. Their three goals on the evening also set a new school record of 75 goals in a single season eclipsing last year’s mark of 73. Louisville also only surrendered 23 goals this season which is the least since 2004 when they only allowed 19 and their goal differential was a school record 52.