Halie Barton, Rachel Baughman, and Devin Kring each scored a pair of goals and Sarah Jaroszyk added the other goal as the Lady Leopards topped Massillon 7-0 at Louisville Leopards Stadium Monday night.  Seniors Cindy Skolosh, Lauren Skolosh, and Sarah Wyss were also honored for Senior Night before the game started.

The first goal of the contest came off the foot of Devin Kring after she broke away from the pack down the left sideline and booted the ball into the left side of the net.  Jaroszyk scored just 69 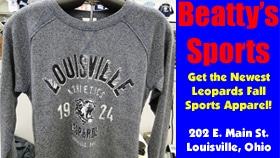 seconds later from the right side of the goal.  Kelly Miller provided the interception on defense and then passed the ball to Sami Keefe at midfield.  Keefe delivered the assist on a lead pass down the right sideline and Jaroszyk beat the defenders and the goalie to the net to make it 2-0 Leopards.

After several opportunities to score slipped by, Baughman got on the board with back-to-back goals.  Kring and Jaroszyk assisted Baughman in scoring her 28th and 29th goals of the season.  With two games remaining in the regular season and the tournament looming ahead, Baughman needs 3 goals to tie and 4 goals to break Carley Adams record of 32 goals in season set back in 2008.

Barton scored her first two goals of the season before the half ended as well. On the first goal,  Jaroszyk fought a pass through an orange wall of defenders and Barton skied it into the top right side of the net to make it 5-0 Leps.  Later, Keefe provided her second assist of the game when she laced a pass ahead to Barton in the center front of the penalty box.  Barton beat two Massillon defenders  and shot the ball into the right side of the net past the stunned goalie to make it 7-0 with 3:37 left in the first half.

The only other goal came 9 minutes before, when Jessica Hamsher intercepted a Tiger pass and aggressively dribbled into the right corner.  She then centered the ball to Kring who hit home for her second goal of the evening.  Many Leopards substitutes and JV players played Massillon to scoreless tie in the second half.  But the point had already been exercised in the first half as Louisville cruised to a 7-0 victory to move to 12-2 on the season.

UP NEXT: The Lady Leopards will next host the West Branch Warriors on Wednesday, October 3 at 7:00 PM at Louisville Leopards Stadium.  If the Lady Leps win then they will clinch the NBC Outright and secure their first ever league title in soccer.