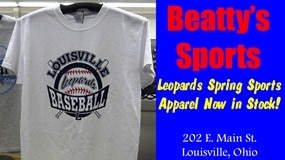 Louisville was led by Riley Groves who pitched the entire contest and struck out 8. Pavin Parks, Kyle White, and Garrett Yoder managed only hits for the Leopards in the contest.

Tyler Schuch pitched a complete game 3-hit shutout and struck out 10 to lead Triway. Schuch also added an RBI and Parker Carmichael had a pair of RBI groundouts. The Titans Lane Drake also went 2-for-2 with a double and 2 runs scored.

The Leopards only run of the contest came in the fifth inning. Alex Hollifield walked to begin the inning and advanced to second on Joe Crank’s sacrifice groundout. After two straight outs, Hollifield stole third and then came home via the ensuing overthrow to third on the play.

Louisville is now 11-12 overall on the season and 25-23 all-time in Division II Tournament play. The last time the Leopards fell in the Sectional Finals was on May 11, 2005 in a 3-2 loss to Northwest. Louisville is now 2-2 all-time against Triway in tournament play and 18-9 in DII Sectional Tournament contests. The Leopards will conclude their season Thursday when they host Marlington for Senior Day.

UP NEXT: The Leopards will conclude the season by hosting the Marlington Dukes on Thursday, May 16 at 4:30 PM. Senior Day Honors will be held as well at 4:15 PM.