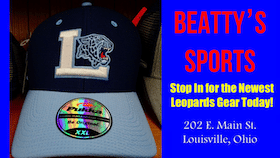 Zachary Muller ran in a touchdown from a yard away with only 16.7 seconds remaining in the fourth quarter to tie the game at 14-14. Dillan Geier then caught a two-point conversion pass from Quarterback Luke Laubacher to give the Panthers the lead and eventually the game at 16-14.

The score capped off a 13 play, 65 yard game winning Perry drive that included a 21 yard run by Owen Wengerd and 2 key third down conversions. Facing 3rd-and-14 on their own 29 the Panthers went to the air as Laubacher hit Geier for an 18 yard gain. Wengerd also ran for the necessary yards on 3rd-and-5 from the 6 one play before the game-tying touchdown.

The Leopards were in control most of the game as they pounced on the Panthers in their opening drive. Louisville went into the bag of tricks on the first play of the game when Daniel Kennedy took a handoff and stepped back to throw to a wide open Broc Pickens for a 39 yard gain. A few plays later Quarterback Tyler Jackson found the outstretched arms of Pickens in the right corner of the endzone for six. Jackson passed to Kennedy for the conversion try giving the Leopards an 8-0 lead with 4:47 left in the second.

Louisville also caught a break on their first play on defense. Charlie Stanley grabbed the arm of the Perry ball carrier and Clayton Elder laid out a hit to jar the ball free. Leopards Defensive Lineman Austen Black fell on it at the PHS 42.

Each defense recorded an interception on the next two drives. Jack Nelligan made the pick for the Panthers defense at the 12 and Elder pulled down an interception positioned perfectly in front of the Perry receiver at the 1 yard line. Louisville was called for holding in the endzone on the next play which gave the Panthers a safety making it 8-2 at the end of the first.

The Leopards defense came up big twice in the second quarter. Linebacker JD Spitaleri burst through to make a stop on 4th-and-2 giving Louisville the ball back on their own 29. Pickens also intercepted a tipped pass at the Perry 42 later in the quarter.

The Leopards surrendered their advantage in the third quarter. Wengerd ran for a 23 yard burst to the Louisville 24 for the big play on their game-tying scoring drive. Several plays later he’d score on a 10 yard reverse on a 3rd-and-8 play. The conversion pass fell incomplete keeping the score knotted at 8-8 with 4:47 left in the third.

The defenses held on each team’s next possession and the Leopards started from their own 15 late in the third quarter. Louisville marched 65 yards on 13 plays to take a fourth quarter advantage. The drive started with 9 yard runs by Kennedy and Brady Vanover. Jackson and Pickens also connected 4 different times on the drive. Their last hookup converted a key 3rd-and-7 to get the Leopards into the redzone. Two plays later, Jackson bulleted a pass to Kennedy who caught it at the center of the goal line to give Louisville a 14-8 lead with 6:22 left to play.

UP NEXT: The Leopards JV will next travel to Youngstown’s Wick Rec. Park to take on the Ursuline Fighting Irish on Saturday, September 22 at 11:00 AM.