After a disappointing 2-5 start to the 2006 campaign, the Louisville Leopards concluded the season by winning their final three games to finish an even 5-5. On October 13, 2006 they began this run by downing the visiting West Branch Warriors 26-6.

Louisville’s defense came up big by stopping West Branch three times in the redzone, which included two times in the first quarter. The Leopards defense did not allow the Warriors on the scoreboard 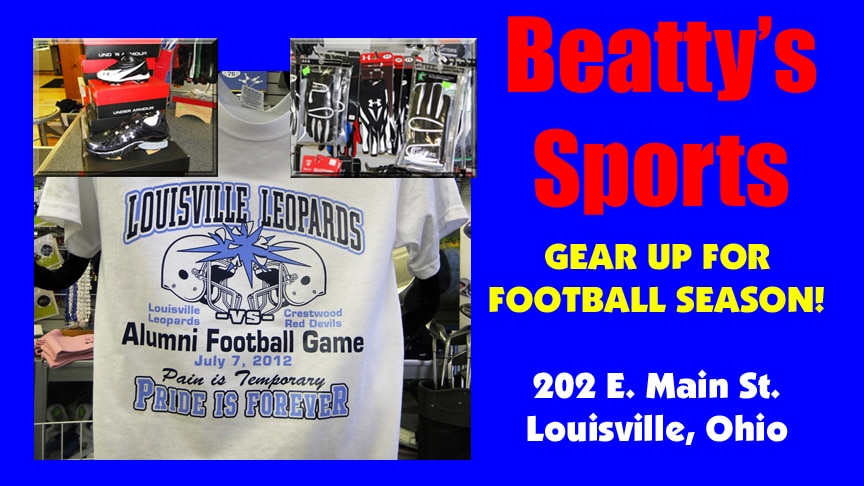 until 10:43 left in the fourth quarter, after the outcome had practically been decided.

On offense, Louisville opened up their biggest passing attack of the season. Quarterback Ben Schmucker completed 17 of 30 passes for 258 yards and completed touchdown passes to Tyler Adkins and Neal Seaman. Schmucker also ran in two scores from a yard out in helping the Leps build a 26-0 advantage after three quarters.

Schmucker’s ability to wildly scramble away from West Branch defenders allowed Adkins, who finished with 5 catches for 81 yards, to get open on the first touchdown throw. Later on in the third quarter, Schmucker floated a ball into the right corner of the endzone just past the hands of a lunging Warrior defender and into the arms of Seaman for six more.

The Warriors were led by Dustin Woolf who ran the ball 15 times for a game-high 70 rushing yards and Steve McNeely who scored the only touchdown for West Branch from a yard away.

Kyle Falk was Louisville’s leading receiver with 8 catches for 115 yards as 291 of the Leopards 329 yards of offense came through the air.

BEATTY'S SPORTS SCOREBOARD | GIRLS VARSITY BASKETBALL: New Philadelphia 45 Louisville 43 0:01.2 left in 4th Lots of contact, Quakers come up with the steal in the backcourt. 22 hours ago

BEATTY'S SPORTS SCOREBOARD | GIRLS VARSITY BASKETBALL: New Philadelphia 45 Louisville 43 0:10.9 left in 4th Steal by the Quakers and a foul sends them to the line for a 1-and-1. 22 hours ago