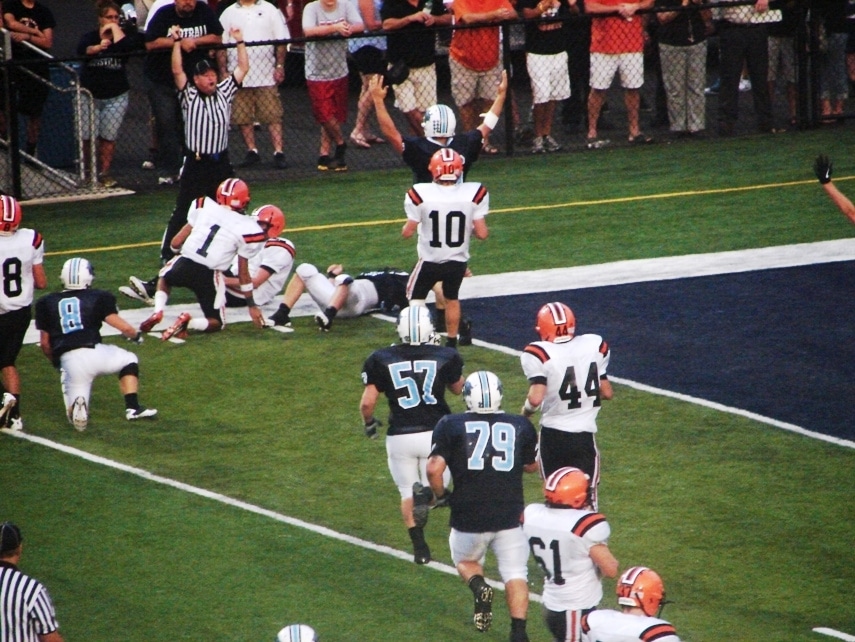 Lucas Poyser scores 1 of his 4 touchdowns on a night in which he ran for career-high 206 yards.

A week full of distractions came to a close and all it proved was one thing: the Leopards were focused on North Canton.  From the very first snap you knew Louisville came to play, hit hard, & rock their rivals.  A few plays into the game a phantom snap bounced on the grassy turf all the way to the 1-yard-line where Hoover quarterback Austin Appleby fell on it.  Appleby was pressured on the next play and lobbed a pass to the right sideline that was picked off by Adam Nees.  Nees ran it back 18 yards and Louisville was on the board with a 7-0 advantage.

On Hoover’s next drive Appleby found an open Austin Feinberg who made a spectacular catch, but forgot to secure the ball.  Again the brown oblong spheroid bounced against the turf before defensive back Dillon Stertzbach fell on it at the Louisville 38-yard-line.  Louisville would then capitalize on their first possession on a consistent drive that ended with Billy Lairson hauling in a 19-yard touchdown pass from Chad Neff.  Neff finished the night 14-of-17 for 152 yards through the air.  14-0 Leps.

Although the humid weather had many fans wishing it would rain, the Vikings wished it would stop pouring.  They fumbled the ensuing kickoff and Louisville’s Charles Beamer pounced on it, setting up the explosive Leopard offensive with a short field on the Hoover 31.  Neff converted a 3rd-and-4 and scampered all the way to the 3-yard-line where he was hit out of bounds, inching the Leopards a little over a yard closer on a personal foul call.  Poyser took care of the rest pounding it in from there.

The Louisville defense got a stop, but the offense coughed the ball up on the next drive.  Hoover would capitalize off the turnover with an Appleby screen pass that was turned into a 59-yard touchdown scamper for the speedy Xavier Hogan to make it 21-7.

But just when the Vikings had seemed to have cracked open the coffin, the Leps nailed it shut again.  With less than a minute remaining in the first quarter Poyser scored on a razzle-dazzle 26 yard touchdown run to give Louisville their fourth touchdown of the quarter.  The 28 points are the most by a Leopards team in a quarter since Week 6 of the 2009 season when they score 35 against West Branch in the second quarter.

The first quarter story translated over to the second quarter.  Appleby was pressured and passes were thrown away, or open receivers couldn’t hang on.  Punting was a disaster for the Vikings all night long including an over-the-head snap that gave Louisville two additional points.

Hoover did have one bright spot on the defensive side of the ball stopping Louisville on a fourth down play inside the redzone.  But the Hoover dam, no pun intended, could only hold back the raging river that was the Leopards offensive for so long.  Louisville scored twice in the final 4:22 on a 43-yard run by Poyser and a 1-yard run by Neff.  The touchdown that gave the Leps a 44-7 lead was set up by a beautiful reception by Trent Ohman, who led the Leopards with 6 catches for 62 yards on the night.  Neff finished the night with 16 rushes for 75 yards on the ground.

The scoreboard lights seemed surreal, it seemed like something out of a video game for the Leopards and a freak disaster for the Vikings who trailed by 37 heading into the locker room.

In the second half, Poyser ended a 9 play 77 yard touchdown drive with a shifty 30-yard touchdown run to give the Leopards fifty points and it was all academic after that. 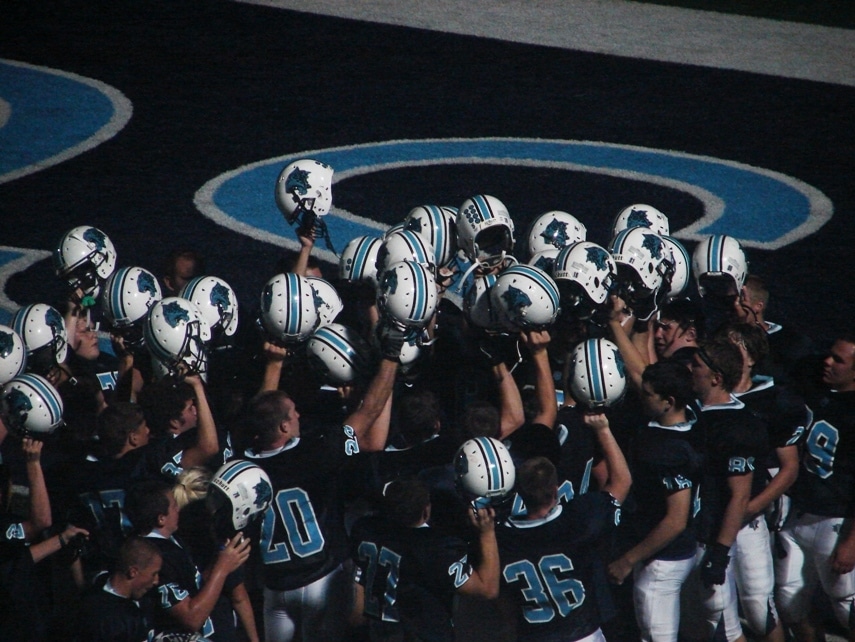 NEXT UP: The Leopards will travel to Ravenna to take on the Ravens on Friday, September 9 at 7:00 PM.  A Preview for the Battle of Route 44 will be available next week so stay tuned.