<<< Previous Vs. Marlington | Baseball Schedule | Next Vs. Chardon >>>

Senior starting pitcher Anthony Warner threw a complete game one-hit shutout to lead the Leopards to victory on the mound. He pitched all seven innings, walked three, and struck out ten in the process to improve to 9-0 on the season. Warner’s ninth win ties him with Riley Groves (2012) and Heath Hinkle (2004) for the most pitching victories in a single season in team history.

Warner issued a one-out walk in the second inning for his only blemish during his first time through the University School lineup. He struck out the side in the third and added a pair of strikeouts in retiring the side in order in the fourth.

Warner Works Out of Jams in 5th and 6th

The Preppers best opportunity came in the top of the fifth. Freshman second baseman Aaron Moss led off the inning with a walk. Then sophomore right fielder Riley Penn recorded the only University School hit of the contest on a line drive single just over the outstretched glove of leaping senior shortstop JT Popick. With two on and no one out, Warner got the next batter to ground into a 6-4 fielder’s choice to senior third baseman Caleb Miller. That left runners on the corners with just one out.

Two pitchers later, senior catcher Walker Kandel gunned down junior pinch runner Sammy Martin at second base. Popick paid the price in applying the tag on the play, but held on for the second out of the frame. The game was delayed a bit as trainers came out to fix up Popick. On the very next pitch after he recovered from the blow, senior first baseman Ryan Tyler hit a ground ball right to Popick at short. Popick made a routine throw to first base to record the final out of the inning.

The Preppers threatened again in the sixth inning. Senior left fielder Jae Smith hit a ground ball to first base, but the exchange to Warner covering the bag missed its mark allowing Smith to reach on error. Another error on an errant pickoff attempt allowed Smith to advance all the way to third base and put him ninety feet away from breaking the shutout. However, Warner finished off the junior center fielder Ryan Pattison with a swing strikeout to end the inning.

Warner would go on to throw a scoreless seventh inning to seal the Leopards first regional victory since 1988. Warner has now allowed just single earned run in 41 2/3 innings pitch and has thrown a complete game shutout in three of his last five starts.

The Louisville offense wasted no time in jumping out to another first inning advantage. Popick ripped a line drive single to center field to lead off the frame. He then advanced to second base on a wild pitch and then stole third base. Popick scored a few pitches later when senior left fielder Connor Adelman singled to center to make it 1-0. Both Popick and Adelman would finish 2-for-3 for the game to lead the Leopards at the plate.

Later in the third inning, Popick jumped on the first pitch he saw and hit a hard ground ball single to left field. Popick advanced to second on a sacrifice bunt by junior center fielder Charlie Roberts before stealing third base. LHS would finish 5 for 5 on base stealing attempts throughout the game with Popick and Adelman swiping two bags each. With two outs, junior designated hitter Karson Siegfried smashed an RBI double off the right field chalk line and into the corner. Popick scored his second run of the game in the process to extend the LHS lead to 2-0.

The only other extra base hit of the game came when Miller led off the bottom of the sixth with a triple over the outfielder’s head in right field. Junior second baseman Connor Morley followed with an RBI groundout to second base that enabled Miller to come home to extend the Leopard advantage to 3-0.

Juniore starting pitcher Evan Shapiro threw all six innings and struck out 11 to lead the Preppers in a losing effort. Shapiro retired the Louisville batters in order in the second inning, but the Leopards were able to get a runner aboard in every other inning throughout. Louisville would out-hit University School 6-1 for the game.

The Leopards threatened to blow the game open in the bottom of the fourth when Shapiro issued back-to-back one-out walks to Morley and Kandel . Shapiro hit senior right fielder Zack Seaman three pitches later to load the bases. However, Shapiro would get Popick to make contact on a check swing that chopped back to the mound for a 1-2-3 double play to end the inning.

This is the third time in program history that Louisville Baseball has reached the Elite Eight. In 1942, the Louisville Blue Raiders defeated Akron Kenmore 4-3 to win the Class “A” North Eastern Ohio District Title. This put them in the state tournament, which at the time consisted of eight teams instead of four. In 1988, the Louisville Leopards shutout the Austintown Fitch Falcons by the same 3-0 score in the AAA Youngstown Regional Semifinals to advance to their only other regional final game.

The Leopards will look to make history Friday evening at Thurman Munson when they face a familiar foe. Standing in their path will be the #24 ranked Chardon Hilltoppers, the DII Struthers District Champions. The Hilltoppers defeated Richfield District Champion Chagrin Falls 4-1 earlier in the afternoon Thursday at Thurman Munson. Louisville and Chardon are very familiar foes meeting three times already during this campaign. The Hilltoppers won 12-5 in an eight inning scrimmage back on March 19. On April 16, the two teams split a doubleheader with the Leopards winning the first game 7-4 and Chardon taking the second game 4-2.

UP NEXT: The #19 ranked Louisville Leopards Baseball Team will take on the #24 ranked Chardon Hilltoppers in the DII Canton Regional Championship Game on Friday, June 3. Game time is set for 5:00 PM from Thurman Munson Memorial Stadium. 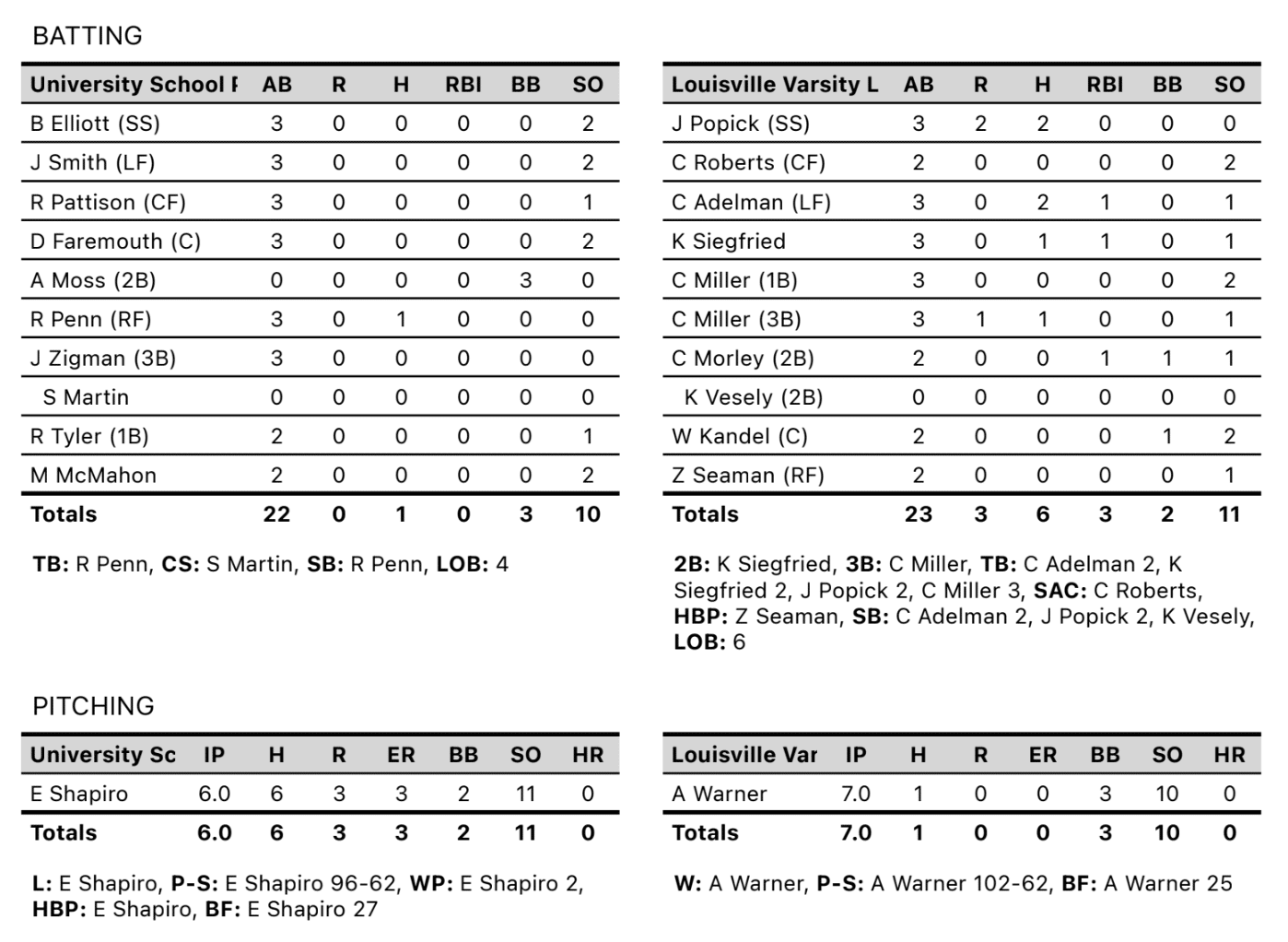