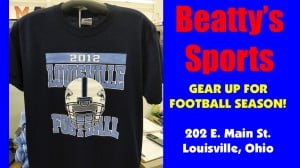 seconds before half to Wide Receiver Bob Burick.  Burick finished the night with 3 catches for 73 yards and 2 touchdowns.  His first touchdown came when he broke wide open down the right sideline and caught a pass from runningback Chris Menegay.  Menegay opened the scoring with a 1 yard run and also caught a two-point conversion from Aljancic.  The Leopards only other touchdown came when Brian Beatty dove in from 1 yard out.