On October 11, 1985 the Leopards fumbled four times leading to 3 Marlington touchdowns.  After this, Louisville faced a 22-7 fourth quarter deficit on Homecoming night.

However, the Leopards rallied with two touchdowns from runningback Scooter Israel.  In addition to his pair of 2 yard touchdown runs, Israel also ran in a two point conversion on the first touchdown.  Louisville put together a 70 yard drive to make the score 22-15 in large part do to the passing combination of Quarterback Jeff Cady and Wide Receiver Mark Blyer.  After Israel’s second score with 3:55 left, Don Webb’s extra point tied the game at 22-22. 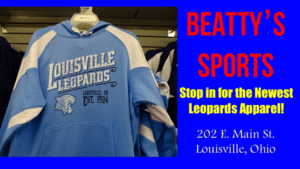 The Leopards defense held firm for the rest of regulation and also forced a Marlington field goal attempt in their overtime possession.  Louisville’s Erik Hewitt, who had 17 defensive stops on the evening, blocked the 30 yard attempt kicked by the Dukes David Varner.  Louisville took over for their possession and immediately got 15 yards off a Rich Beaver run.  On the very next play Todd Ackerman paved the way for Israel’s walk-off five yard touchdown score.  Louisville won the game 28-22 to improve to 3-4 on the season.

Earlier in the first quarter, Cady found Mike Libertore for a 9 yard touchdown pass to give the Leopards an early 7-0 lead.  Marlington would then score 22 unanswered points on a 22 yard field goal from Varner, 2 touchdown runs by Ron Miller, and a touchdown pass from Miller to Tom Freshly.

Despite the points off turnovers, the Louisville defense played well.  Craig Cross had 14 tackles and Ron Horton also brought down 10.