On August 24, 2007 the Louisville Leopards began their run to the state title game by scoring 28 points in the second quarter. 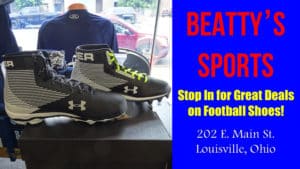 The Leopards then held off a Ravenna rally to win at Gilcrest Field 35-28.  Brandon Mathie Caught 6 Catches for 105 Yards and 3 Touchdowns to lead the Leopards.

After a Mathie touchdown and a 10 yard touchdown run by Clay Swigert, the Ravens cut the deficit in half with a 5 yard touchdown pass from quarterback Brandon Pesicek to Mike Petrone.  However, their progress was immediately erased when the blazing fast Bobby Swigert returned the ensuing kickoff 80 yards for a touchdown.  Another Seaman to Mathie to connection put the Leps up 28-7 at the half.

Ravenna answered the Leopards with 14 unanswered points to cut the lead to 28-21.  Blayre Davis scored on a 1 yard run and

Pesicek threw his second touchdown pass from 5 yards out to Bobby Clement.  Pesicek finished the night 14 of 28 passing for 238 yards.

Seaman’s third touchdown pass to Mathie all but sealed the deal in the fourth quarter giving Louisville a 35-21 lead.  Ravenna made things interesting though, as their final touchdown came on a gadget play which saw Johnathan Davis find Blayne Boykin who beat the Leopards secondary for the score.  The ensuing onside kick was recovered by Louisville and a few rushing first downs later the clock read triple zeros.  Seaman, who played a big part in closing out the game, also finished with 118 yards rushing.