The Louisville Leopards Swim Team competed at a tri-meet in Orrville this past Wednesday. The Louisville Boys earned their first victory of the season defeating the host Red Riders 53-26, but also fell to Canton Central Catholic 137-53. The LHS boys are now 1-4 on the season after the split. The Lady Leopards swept the competition in a close meet. They defeated the Crusaders 104-98 and Orrville 104-94 to improve their season record to 3-2.

The Leopards Boys were unable to capture first in any event in falling to Central Catholic 137-53, but earned second place in 4 events which allowed them to take second place for the meet ahead of host Orrville 53-26.

Isaac Budinski led Louisville by placing second in four separate events. Budinski captured second individually in the 50 Freestyle and the 100 Backstroke He was also part of the 200 Medley and 200 Freestyle Leopard relay teams that placed second.

Michael Conway and Hunter Miday were also members of both relay teams that took second place. Angelo Dyer was the final member of the 200 Medley Relay Team and Ty Hopkins rounded out the 200 Freestyle Relay Team.

Conway also came in second individually in the 500 Freestyle in his best time for the season. Dyer, Miday, and Budinski also finished with their best times for the year.

The Louisville Girls captured first in two events and earned enough points to defeat both Central Catholic and Orrville 104-98-94.

Kiersten Frankford led the Lady Leopards by winning the 100 Freestyle and taking second place in the 50 Freestyle. Frankford was also part of the 200 Medley and 200 Freestyle relay teams that both placed second.

The trio of Frankford, Lewis, and Warner swam in both relay teams that took second place. Girton was the final member of the 200 Medley an Shaelyn Clark competed in the 200 Free relay with the trio.

UP NEXT: The Leopards will next compete at the annual Cloverleaf Stampeded on Saturday, December 28 at 10:00 AM. 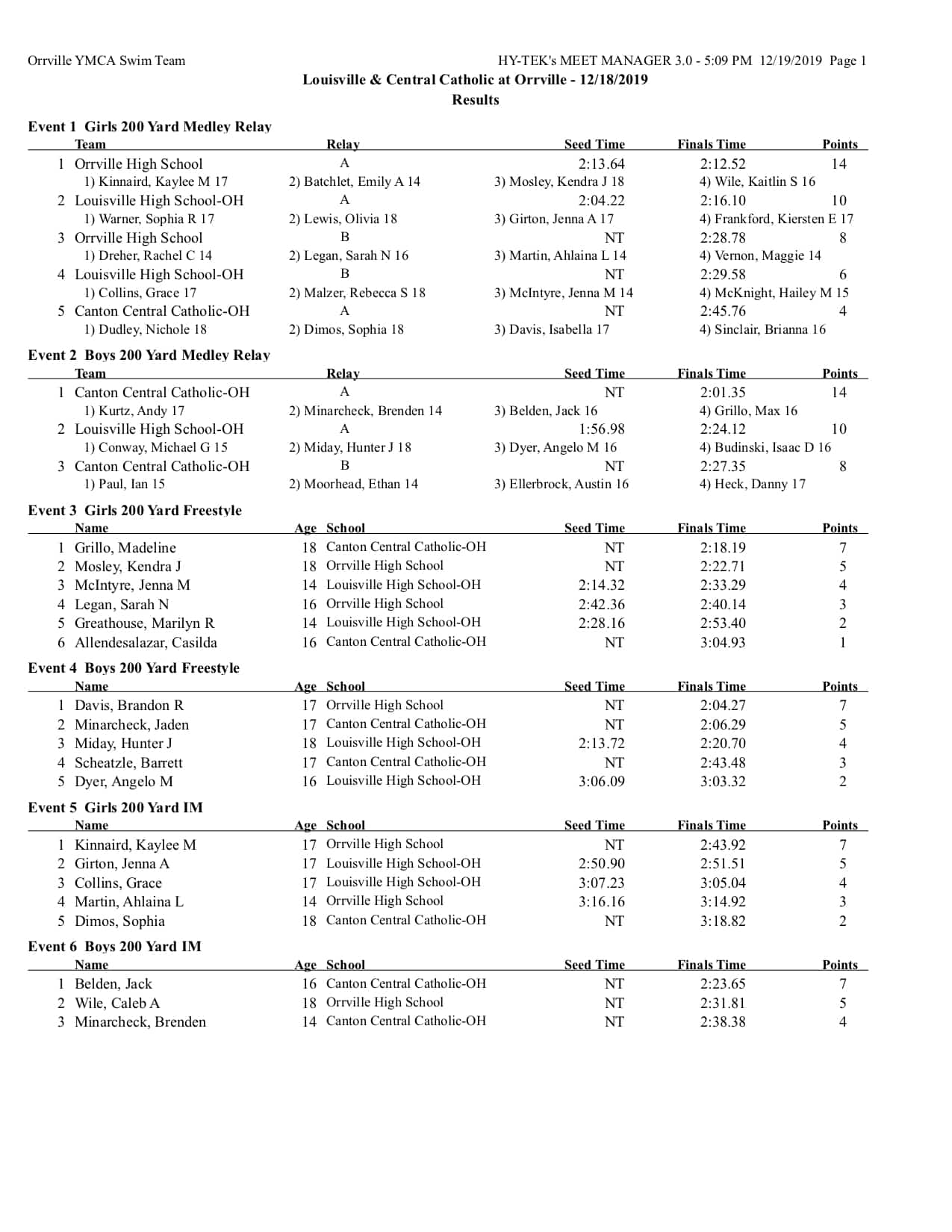 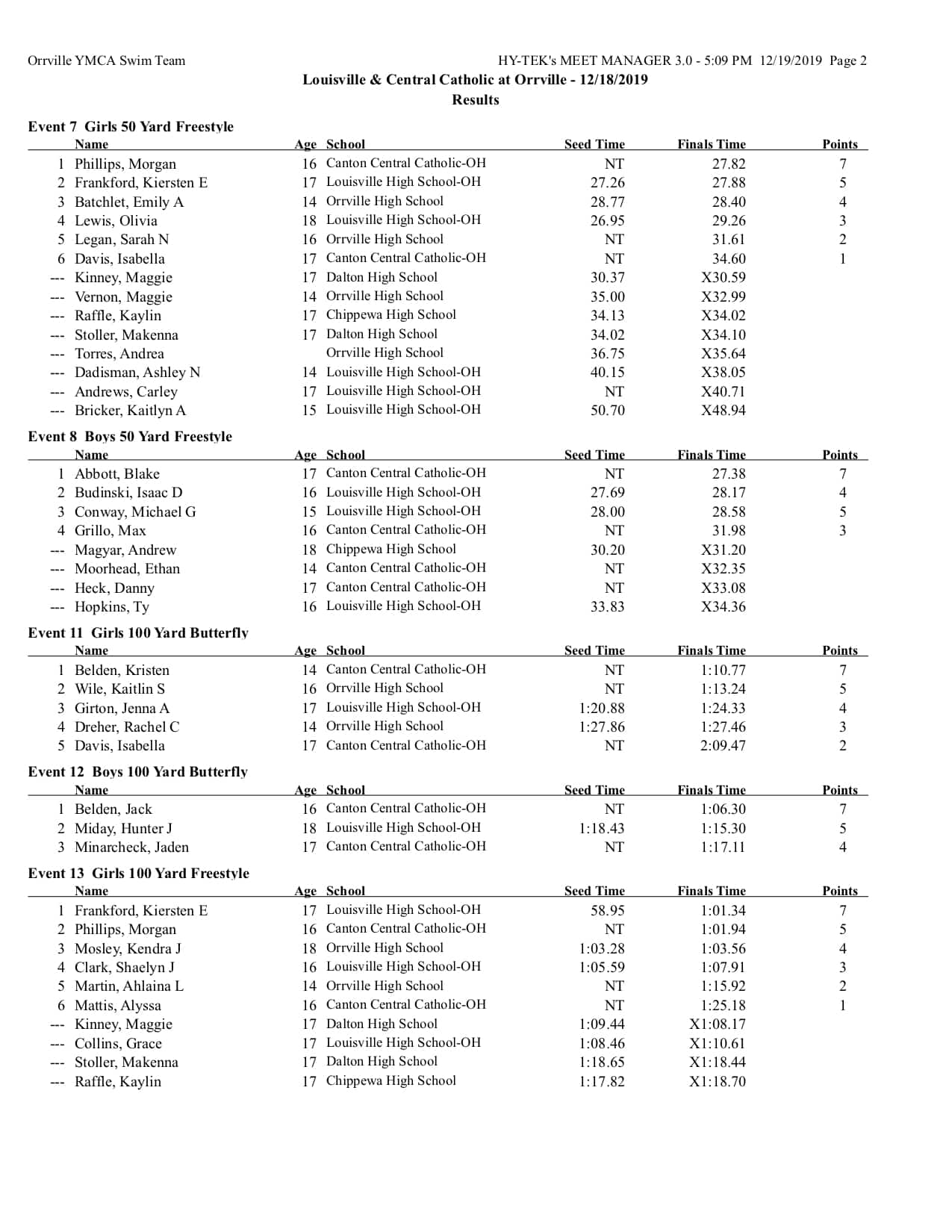 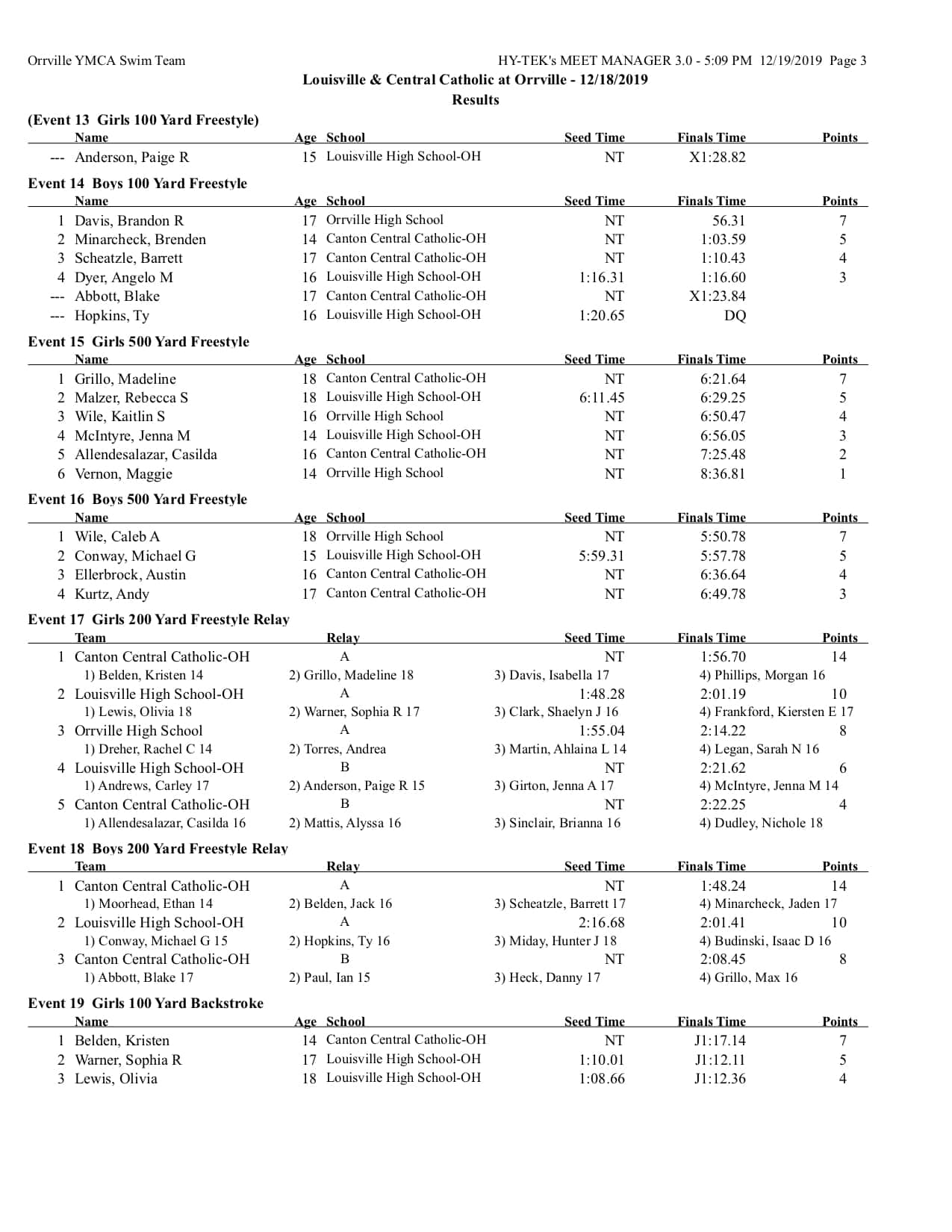 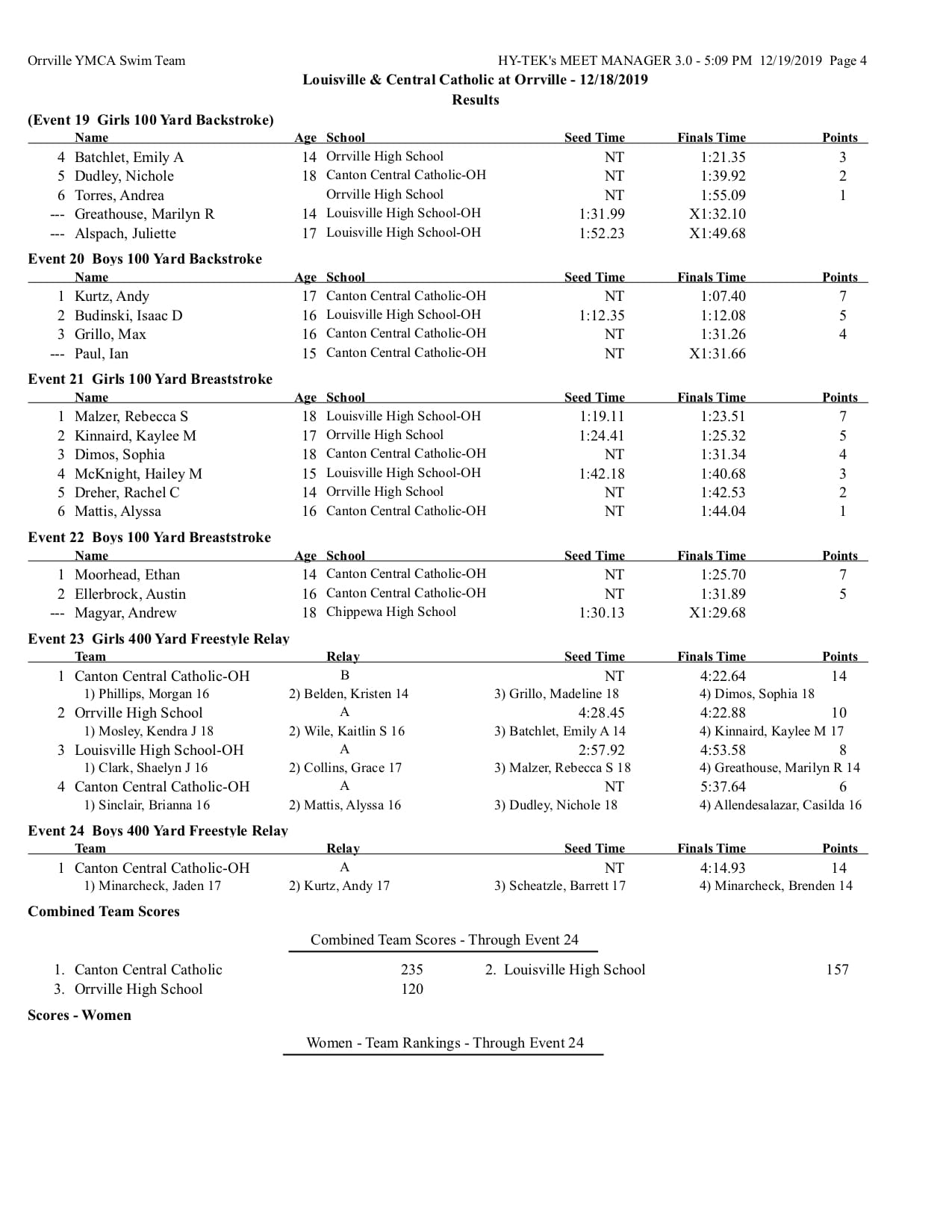 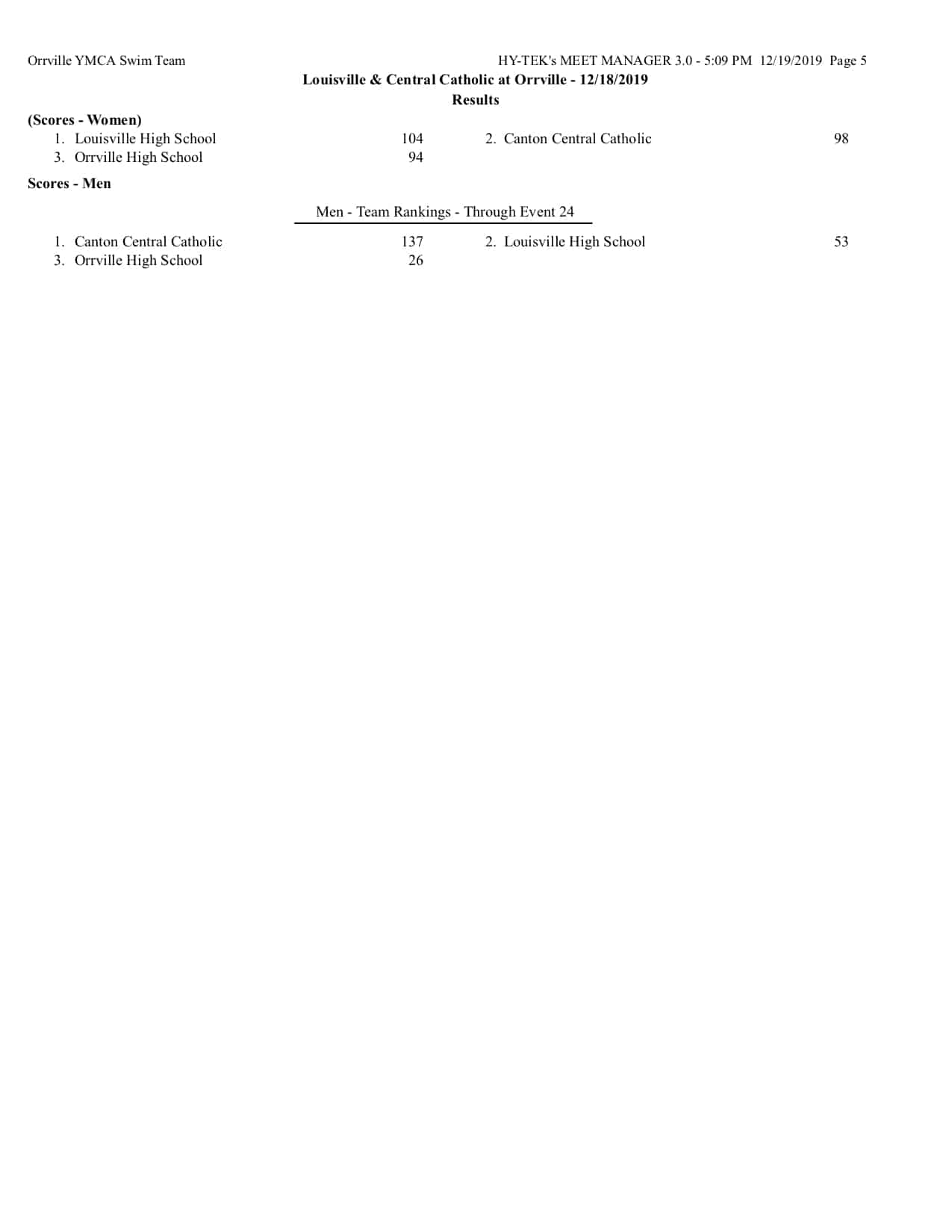