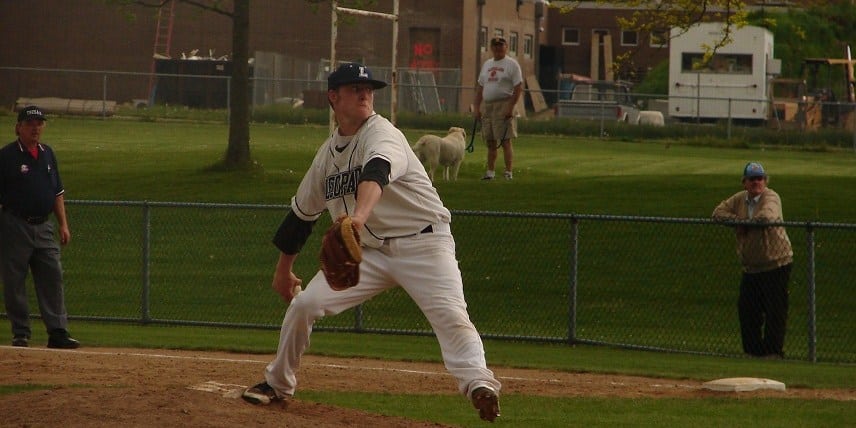 The thunder rolled and the rain pour down, but mother nature was too late as Louisville Leopards and Coventry Comets finally completed their Sectional Final game Saturday morning.  Louisville rallied from a 2-1 deficit and scored six runs in the sixth inning to capture the their sixth straight Sectional Championship.

After giving up a two-run home run in the first inning to the Comets on Friday, Dillon Stertzbach buckled down pitching a complete game three-hitter and striking out nine.  Stertzbach also helped his own cause by going 2-for-3 with an RBI.  In the bottom of the fifth, Stertzbach ripped a triple to right field and then scored a few pitches later on a passed ball to tie the game at two a piece.

After waiting two days to complete their first tournament game due to inclement weather and a controversy filled Friday evening, the dam finally broke for the Leopards offense in the sixth inning.  The Leopards pounded out six hits and scored all six runs with two outs.  Mike Kelly drived in the go-ahead run with a hit to center that scored Shawn Adams.  Stertzbach again got in on the action by padding the Leps lead with an RBI infield hit that scored Connor Ruffier.  Jeremy White followed with a line drive double that scored Kelly and Stertzbach.  White led the Leopards offense by going 3-for-4 with two RBIs.  White eventually scored on a passed ball and to cap off the inning Chad Neff drove in Jon Crank to give the Leopards an 8-2 lead.

The Comets led off the seventh with their third hit of the game, but Stertzbach struck out the side after that.  The Leopards will face either Canton South or Alliance Thursday in the District Semifinals.  The Wildcats were beating the Aviators 5-1 in the second inning before the game was called.

FOLLOW-UP FROM SATURDAY: Both Coach Siegfried and Jake Duvall were reinstated into the game and the umpire apologized for incorrectly ejecting them for using an illegal bat.  Duvall remained out, but did not return to the game.

NEXT: The Leps will play for an outright NBC Title at West Branch Monday, May 16 at 4:30 PM.

NEXT TOURNEY GAME: The Leps will play the winner of the Canton South at Alliance Sectional Final  in Canton on Thursday, May 19 at 5:00 PM.   The District Semifinals and Finals will both be held at Thurman Munson Memorial Stadium.  The Leopards split the season series with Canton South earlier this year and  swept the Aviators.

The Lady Leopards will host the Canton McKinley Bulldogs were unable to play their Sectional Final tournament game again today.  The two squads will play at Louisville on Monday, May 16 at 4:30 PM.  The game originally schedule on Monday against Canton South has been moved to Tuesday.  The winner of the McKinley vs. Louisville game will play the defending state champion Perry Panthers at Massillon Community Park on Thursday, May 19 at 4:30 PM.