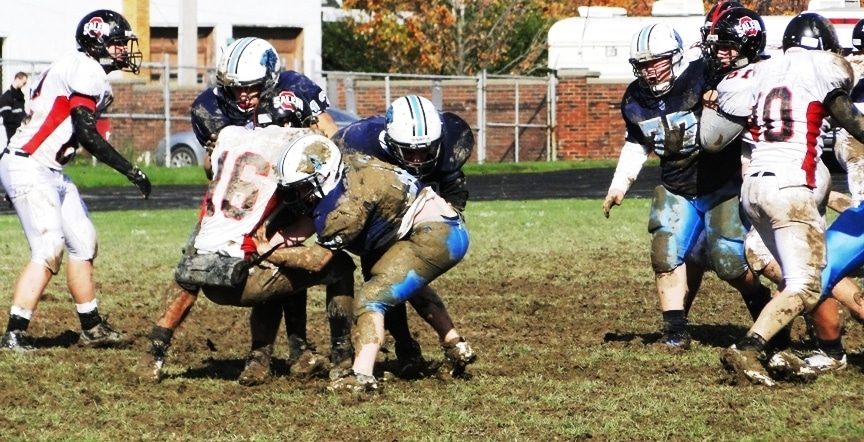 On a field that was likely composed more of mud than grass, the Louisville Leopards JV football team gutted out their second straight shutout to close the season.  Louisville defeated Salem at Reilly Stadium Saturday morning 20-0.

Louisville jumped out to a 8-0 lead in the first quarter on a touchdown run by Trey Hayford and a two-point conversion run by Trevor Hostetler.  Then, on the first play of the second quarter, quarterback Garrett Robbins hit Hostetler over the middle for a 30 yard touchdown pass.  The extra point failed leaving the score 14-0.

Yardage was at a premium as the field conditions continued to worsen.  Tempers flew like the mud and several late hits were called, while others were not.  Salem’s best threat to score ended with a host of Leopards closing in on and sacking the Quaker quarterback on a 4th-and-goal.  This came after Louisville’s coaches screamed for a late hit penalty against Salem the play before.  The penalty never happened, but the Leopard defense responded with a ferocious pass rush.

Salem, in desperate need for points late, went for a fourth down on their own end of the field and failed to convert.  Louisville took advantage of the short field and Robbins found the endzone on a three yard run to cap off the 20-0 victory.

The Leopards continued to improve all season and finish 2011 with a 6-3 record after starting off 0-2.