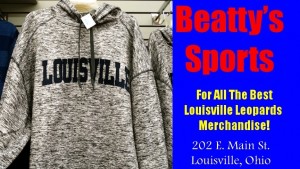 with a 46-15 drubbing of the host Canton South Wildcats Thursday Night at Faircrest Middle School. With the victory, Louisville finishes the season with an overall record of 11-3 and a 5-2 record against the NBC.

Other wins by decision for Louisville came in the lower weight classes. Andy Graham (113) won his match 5-1 and Ryan Jakubiak (120) edged out a 2-1 victory.

UP NEXT: The Leopards will next compete individually in the Sectional Tournament held at Perry High School on Saturday, February 20.