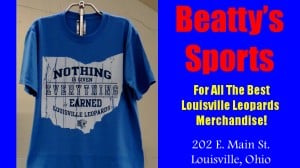 host Marlington Dukes Friday Evening at Marlington Stadium. With the victory, Louisville is now 7-1 overall and is now alone atop the conference standings at 5-0.

Runningback Walter Schrock rushed for 118 yards and 3 touchdowns and Quarterback Connor Zwick threw for 171 yards and 2 touchdowns to lead the Leopards Offense. On Defense and Special Teams Louisville forced 3 takeaways and came up with big play after big play.

Schrock scored on a pair of 14 yard touchdown runs in the opening quarter to put the Leopards ahead 14-0 after one. The first scoring drive was sparked by a 23 yard pass from Zwick to Kyle Woost on 3rd-and-11. The second scoring drive was keyed by a 32 yard run down the right sideline by Zwick.

Third Down Conversions proved to be huge for Louisville as they converted 5 of 8. Two big ones came on their next possession which translated into a 10 play, 74 yard scoring drive. Zwick rushed for 16 yards on 3rd-and-12 as time expired in the first quarter. Later on, the Leopards faced a 3rd-and-21 from the Dukes 25. Zwick rolled to his right and found a wide open Tyler Adams near the goal line for an aerial touchdown that put Louisville ahead 20-0.

The Leopards looked to extend their lead after Casey Nau made an interception on the ensuing Marlington possession. However, Louisville came up empty on a missed field goal attempt. Seizing the opportunity, the Dukes put together their most impressive drive of the night traveling 80 yards in 9 plays. A 20 yard touchdown pass from Quarterback Chris Pennell to Wide Receiver Dylan Simmons cut the deficit to 20-7.

But the Leopards had an immediate answer to the sudden momentum shift as Tyler Adams returned the following kickoff 67 yards to the Dukes 17. Four plays later, Schrock twisted his way into the endzone from 5 yards out for his third touchdown of the evening. As a result, Louisville went into the half with a comfortable 27-7 lead.

The Leopards continued their third quarter dominance out of the locker room to put the game away. Each team traded 3-and-outs to start the half, but Marlington attempted a fake punt deep in their own territory on 4th down. The Dukes ball carrier gained the needed yardage for the first down, but fumbled after taking a hit from Louisville defender Dalton Deckerd. Teammate Marco Buccasso recovered the fumble on the Marlington 44 setting up the Leopards with great field position.

That turnover led to a Frankie Falcone 6 yard touchdown run. On Louisville’s next possession, Alec Jones danced his way into the endzone on a 58 yard strike from Zwick to go ahead 41-7. The Leopards now hold a 76-0 edge against their opponents this year in the third quarter.

Louisville’s second and third string quarterbacks shined in the fourth quarter. Jake Adams threw a 37 yard touchdown pass to Ryan Lautner on the first play of the fourth quarter. Later on, Brody Hahn scampered 31 yards to the house to put the Leopards ahead 54-14.

Marlington also broke double digits in the fourth quarter when Pennell hit Tyler Oakes from 7 yards out. Pennell finished 16 of 31 for 166 yards to lead the Dukes passing attack. Jaq Sampson also finished with 47 yards on the ground and Simmons was the game’s leading receiver with 5 catches for 96 yards.

Louisville got one last break after their final kickoff when Josh McQuilkin and Cole Weston sandwiched the Marlington return man to force a fumble. Corey White pounced on it at the Dukes 40 and the Leopards went into victory formation after that.

With the victory, the Leopards now lead the all-time series over the Dukes 42-5. The win is their first at Marlington since 2008 and they now hold a 19-4 record on the road in the series.

UP NEXT: The Leopards will next host the Alliance Aviators on Friday, October 24 at 7:00 PM.