The Louisville Leopards Girls Varsity Golf Team picked up a pair of wins as they played host in a tri-meet at Pleasant View Golf Club Thursday. Louisville defeated the Massillon Tigers 195-234 and the Canton South Wildcats 195-268 to up their record to 9-6 overall and 6-3 in conference play.

Katie Bice was the medalist for the match as she finished with a match best 39. Other scorers for the Leopards included Alexis Beaver 51, Madison Grubers 52, and Madyson Fowler 53. 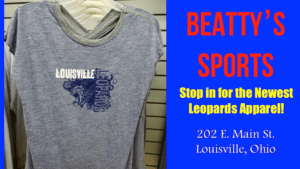 Massillon was led by Gia Hathaway who shot a team low 42. Rounding out the scoring for the Lady Tigers were Hailey Beal 61, Hannah Frey 64, and Peyton Wagner 67. This was the first ever meeting between the Louisville Leopards and Massillon Tigers Girls Golf programs.

Kelsie Sylvestro shot a team best 59 to lead Canton South. Other scorers for the Lady Wildcats included Grace Nichols shooting a 69 and both Mia Culberson & Brooklyn Menefee who shot a 70. Louisville is 6-0 against Canton South all-time, which includes a 3-0 mark in home matches.

UP NEXT: The Lady Leopards will next travel to Minerva to take on the Lions on Thursday, September 7. Tee-time is set for 4:00 PM and Edgewater Golf Club.
Picture Courtesy of Tricia Mcalister-Adkins