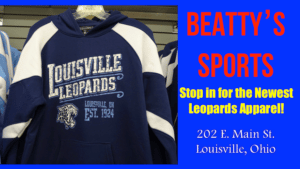 Bailey Adams rewrote the Louisville Boys Soccer Record Book by scoring a single game record 6 goals en route to setting the all-time mark for career goals as well. After 26 minutes of stalemate, Adams erupted for a Hat Trick in a span of just 4:16. Derek Zeller redirected a pass from Riley Adams over to a breaking Bailey Adams who sidestepped the goalie and laced the ball into the back of the net. Then, Adams intercepted a Massillon pass and shot the ball home right to left at a wide angle. For his hat trick score, he threw the ball in from the left sideline off a Tiger defender and regained possession of the ball. Adams dribbled down a lane passing five Massillon defenders on his way to the net to make it 3-0.

Louisville tacked on two more goals before the break. Off a pass from Bradley Terra, Zeller blasted a kick from 28 yards away off the goalie and the ball rolled past the goal line for the score. Soon after that, Adams delivered a pass across the field to a charging Travis Pape who blasted it back into the left side of the net to make it 5-0 Leopards.

Louisville wasted no time in adding to their total in the second half. A shove at the very top of the box drew a penalty kick and Adams netted it for his fourth goal of the night. Due to a malfunction, the scoreboard was turned off at the request of the sideline official. Scoreboard or not, Adams and the Leopards continued their onslaught.

Adams scored two goals less than a minute apart to make history. His brother Riley Adams sprung him loose with a pass down the right sideline. Adams dribbled to the right, aimed, and fired the ball into the back of the net. Terra intercepted as Massillon pass just after the ensuing kick off and cleared it ahead. Remaining onside, Adams sped forward and met the ball just ahead of the Tigers defender. The shot ricocheted off the keeper and into the goal for the score to make it 8-0.

With his 6th goal, Bailey Adams eclipsed the previous 5 goal mark set by Nick Meadows against the Ravenna Ravens in a 10-1 DII Sectional Final win on October 23, 2010. Amazingly, Adams essentially scored all 6 of his goals in about 30 minutes of game time. The same goal was also the 43rd of his varsity career, which surpassed Ricky Minster (2003-2004) who previously accounted for 42 goals individually.

Massillon got on the board late when Klay Moll scored on a penalty kick. The Leopards have now defeated the Tigers in 3 straight meetings and are undefeated against Massillon in their last 17 get togethers overall. Louisville now leads the all-time series 15-1-2, which includes an 8-1-1 mark at home.

UP NEXT: The Leopards will next travel to Minerva to take on the Lions on Tuesday, September 12. Game time is set for 7:00 PM at Hines Stadium.