After a scoreless first half, Bailey Adams broke free down the left sideline courtesy of a beautiful cross by Hunter Foley. Adams shook by one defender and shimmied past two others to create an open shot. With a fourth defender charging in, Adams booted the ball into the right side of the net to give the Leopards a 1-0 lead with 38:05 left in the second half.

The play was set up by some excellent Louisville defense just seconds before. Kyle Mayle, Travis Pape, and Logan Rich all did their part to turn away the Marlington scoring chance in the box. Then Russ Kring cleared the ball out to Foley who found Adams for his third goal of the season. 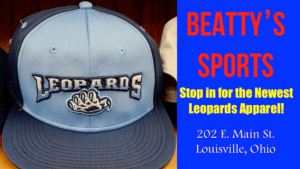 The Leopard lead did not last long as the Dukes struck back 92 seconds later to knot the game at 1-1. A foul was called on a Louisville slide tackle just outside the center of the penalty box. Then Marlington’s Micah Kasier nailed the ensuing free kick into the very top of the net for the game-tying score.

After nearly a half hour of back and forth, Kasier struck again to give the Dukes the lead with 8:16 remaining. Alex Wright launched a free kick from midfield that stunningly bounced into the box untouched by a nearby crowd of players. It seemed like a harmless kick, but the ball bounced up to a perfect height for Kasier to redirect it with his head. It was just enough to sneak it into the net for his second score of the contest.

With the loss, Louisville is now 1-18-3 against Marlington all-time, which includes a 1-8-2 mark at home. The loss also snaps the Leopards 10-game NBC unbeaten streak, the longest in team history.

UP NEXT: The Leopards will next host the Perry Panthers on Saturday, September 2. Game time is set for 7:00 PM from Louisville Leopards Stadium.